Donald Sterling - team owner of Los Angeles Clippers - is alleged to have made racist comments and has now been banned for life by NBA.

The NBA's lifetime ban of Los Angeles Clippers owner Donald Sterling on Tuesday was hailed as a watershed moment that would reverberate far beyond just basketball.

"I believe that today stands as one of those great moments where sports, once again, transcends, where sports provides a place for fundamental change on how our country should think and act," said former NBA player Kevin Johnson, the Sacramento mayor. 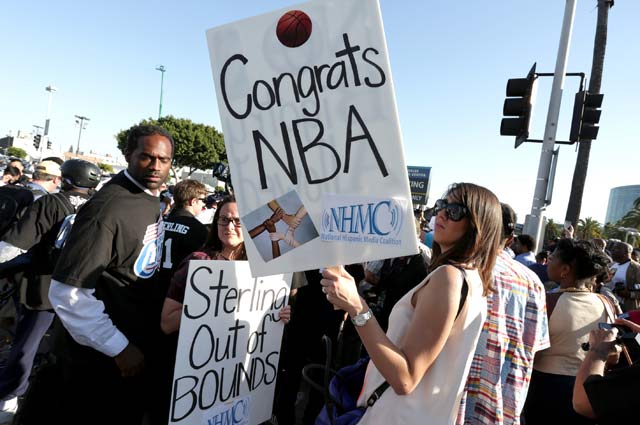 Johnson, who was drafted as a special adviser to the players association as the sport grappled with Sterling's racist remarks, added: "This is also a statement about where we are as a country.

"It doesn't matter if you're a professional basketball player worth millions of dollars or a man or woman who works hard for their family."

"There will be zero tolerance for institutional racism, no matter how rich or powerful," Johnson said, praising NBA players for their forceful but professional reaction in seeking a "maximum reaction" from the league.

"The Clippers have on their jerseys this city's name," Garcetti said. "And today we stand as angels in this city, saying we will not tolerate this from anybody, from any company, least of all one that bears this great city's name." (Also read: Clippers face sponsorship boycott after racism row)

NBA veteran Steve Nash added: "Let's hope this is an opportunity for all of us as players, former players, as a league, as a community, to help educate and take one step further to eradicating racism in our communities."

In addition to a lifetime ban from all games, team facilities and NBA board meetings, NBA commissioner Adam Silver announced he was fining Sterling $2.5 million and would urge the NBA Board of Governors to act according to their constitution to force a sale of the team.

That takes a majority vote by fellow NBA team owners, and many promptly issued statements backing Silver. Sterling made no immediate comment.

Some of the NBA's biggest names used social media to praise Silver, who took over as NBA boss on February 1 upon the end of David Stern's 30-year tenure.

"Current and former NBA players now know that in Commissioner Adam Silver we have a great leader leading our league," former Lakers great Earvin "Magic" Johnson said on Twitter, also urging Clippers fans to turn out to support the team.

Silver's decisive action could help the Clippers, whose best-of-seven first-round playoff series against the Golden State Warriors is tied at 2-2, focus again on their championship chase.

The Clippers face the Warriors on Tuesday night in their first home game since the scandal erupted over the weekend, when an audio recording of Sterling speaking to his girlfriend was made public.

The 80-year-old billionaire was heard chastising her for "broadcasting" the fact that she was associating with black people.

Sterling might still be their owner -- in name at least -- but that did not stop the official Clippers website making its own protest to his comments.

The front page of the website was black except for the words "WE ARE ONE" and the team insignia. Other teams followed suit on their websites in solidarity.