Derrick Rose drilled a long jumper at the buzzer, powering the Chicago Bulls to a 106-104 victory over the Milwaukee Bucks on Wednesday. 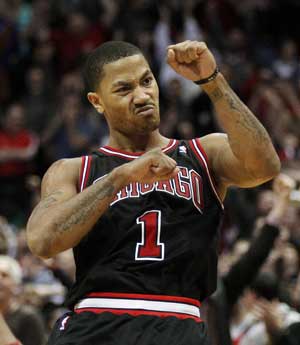 Derrick Rose drilled a long jumper at the buzzer, powering the Chicago Bulls to a 106-104 victory over the Milwaukee Bucks on Wednesday.

Holding the ball for the last shot in a tie game, Rose pulled up just inside the 3-point line and hit it just as time expired. Rose was mobbed by his teammates near halfcourt, and cheered wildly by a predominantly pro-Bulls crowd.

Rose scored 30 and Joakim Noah added 20 points and 10 rebounds for the Bulls, who have won eight straight.

Ersan Ilyasova had a career-high 32 points and Drew Gooden added a season-high 27 for the Bucks, who were coming off a home win over Philadelphia on Monday.

The Bulls held Milwaukee's Brandon Jennings to 11 points on 4 for 18 shooting. Jennings had scored 27-plus points in his previous three games coming into Wednesday.

Comments
Topics mentioned in this article
NBA Joakim Noah Lionel Messi
Get the latest Cricket news, check out the India cricket schedule, Cricket live score . Like us on Facebook or follow us on Twitter for more sports updates. You can also download the NDTV Cricket app for Android or iOS.