Knowing coach Avery Johnson would be giving his team the day off if they won, Williams took matters into his own hands and scored a franchise-record 57 points to lead the New Jersey Nets to a 104-101 victory on Sunday night over the Charlotte Bobcats. 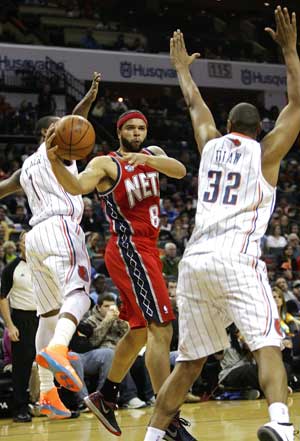 Knowing coach Avery Johnson would be giving his team the day off if they won, Williams took matters into his own hands and scored a franchise-record 57 points to lead the New Jersey Nets to a 104-101 victory on Sunday night over the Charlotte Bobcats.

The Nets needed just about every point they could get from Williams to fend off the pesky Bobcats, who led by as many as 16 in the first half.

"The first half was pretty pitiful," Williams said.

Williams had 17 points in the first half before erupting for 22 in the third quarter to help the Nets battle back from an eight-point halftime deficit and take the lead. He added 18 points in the fourth quarter, including a pivotal shot late in the game to give the Nets a four-point lead.

"He really was focused," Johnson said. "He was well-rested. He made a lot of shots yesterday in our mini-practice and it carried over into tonight's game. We were going back and forth on whether to have a shootaround this morning and we opted for rest. And he was pretty fresh."

Williams' eyes grew a little wider when he realised early on that the Bobcats weren't double-teaming him off pick and rolls.

It's something he hadn't seen all season.

"I'm used to getting double-teamed on those," Williams said. "It's kind of refreshing not to be."

The 57 points are the most in the NBA this season and breaks the Nets' previous team record of 52 shared by Mike Newlin and Ray Williams.

It was the second-most points scored against the Bobcats, one shy of Kobe Bryant's 58 in 2006.

Williams, who came in averaging 21.7 points, shot 16 of 29 from the field and hit all 21 of his free throws. He did miss one attempt at the line, but the Bobcats were called for a lane violation and Williams hit the second chance.

Williams said he was a little surprised when a teammate told him he had 39 points at the end of the third quarter, three shy of his personal career best set April 6, 2010, against Oklahoma City.

"You really don't pay attention to it," Williams said. "It's just one of those games where you start feeling good and let it go."

Added teammate Sheldon Williams: "When someone is hitting like that you want to keep going to the well until it runs dry. It never did tonight."

However, not all went right for the Nets on this night as starting center Brook Lopez rolled his right ankle and left the locker room on crutches. Lopez, who made his season debut on February 19 after missing the Nets' first 32 games while recovering from a broken right foot, had an X-ray but will be reevaluated on Monday, according to Johnson.

"It's a tough situation for him, especially coming back from the foot situation," Johnson said. "We're going to get him checked out tomorrow. We'll know more when we find out."

"You can do one of two things: You can try to stop him and double him and leave other players wide open or guard everybody," Silas said. "I thought that's mainly what kept us in the game. Nobody else was doing anything (for them). It gave us a chance."

Corey Maggette had 24 points and Gerald Henderson added 15 for the Bobcats, who've now lost five straight and 21 of 22.

Williams did just about everything right, adding six rebounds and seven assists. He also converted a four-point play after getting fouled while knocking down a 3-pointer from the wing.

With the Nets leading 96-94 with 1:04 remaining, Kris Humphries missed two free throws but Sheldon Williams got a key momentum-turning rebound and called timeout. Deron Williams hit a big jumper to give the Nets a four-point lead and Sheldon Williams followed by converting a three-point play off a pretty pass from Jordan Farmar.

The Bobcats would cut the lead to two with 3.5 seconds left, but MarShon Brooks knocked down one of two free throws with 1.7 seconds left. The Bobcats had a final chance to tie the game but Augustin's off-balance heave from 20 feet didn't hit the rim.

"We didn't give up," Silas said. "That was a great thing. In the last 1.7 seconds, we didn't execute that play particularly well. But we did have a chance. That shows me that we are getting there. It's certainly not there yet. But we are striving to get there. At least we're not just giving up and letting teams just run over us. If we continue to do this, we'll be OK."