Oklahoma City Thunder dropped into a tie for the NBA's best record when they lost 121-118 at the Denver Nuggets in overtime on Sunday. 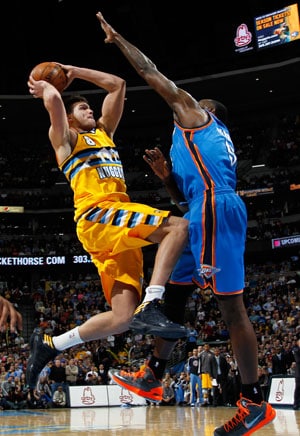 Oklahoma City Thunder dropped into a tie for the NBA's best record when they lost 121-118 at the Denver Nuggets in overtime on Sunday.

Kenneth Faried scored the go-ahead layup in overtime, dropping the Thunder equal with the Los Angeles Clippers on 32-9 records.

Also on Sunday, Detroit returned from its London trip and beat Boston, the Los Angeles Lakers' dire season got even worse with a defeat by the lowly Toronto Raptors, and Dallas hung on to edge Orlando.

The Thunder lost for the first time in five overtime games this season despite 37 points from Kevin Durant and 36 from Russell Westbrook.

The game was a difficult one emotionally as well for Thunder coach Scott Brooks, whose 79-year-old mother, Lee, died on Saturday.

The Detroit Pistons showed no sign of weariness as they returned to U.S. shores following a loss in London and beat the Boston Celtics 103-88.

Rookie Andre Drummond had 16 points and seven rebounds, while also making 6 of 8 free throws for Detroit, which blew an 18-point second-quarter lead but pulled away again in the second half.

Landry Fields had a season-high 18 points and 10 rebounds while Jose Calderon had 22 points and nine assists for the Raptors, who had lost their previous four against the Lakers.

Kobe Bryant scored 26 pont for Los Angeles, whose road skid is its longest in six years.

Dallas' Shawn Marion had 20 points, and O.J. Mayo and Vince Carter scored 15 apiece as the Mavericks held off a late Orlando Magic surge and won 111-105.

The Mavericks led by 13 in the fourth quarter, before the Magic pulled within a basket in the final minute.

Dallas earned its seventh straight road victory in its series against Orlando.