Denver's Andre Iguodala made a free throw with 0.4 seconds remaining after forcing a turnover to deny a last-second shot by Indiana, giving the Nuggets a 102-101 win over the Pacers on Monday. 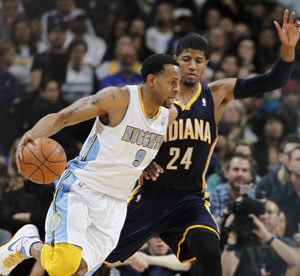 Denver's Andre Iguodala made a free throw with 0.4 seconds remaining after forcing a turnover to deny a last-second shot by Indiana, giving the Nuggets a 102-101 win over the Pacers on Monday.

Denver, overall fifth in the Western Conference snatched the win away from Indiana, which fell 1-1/2 games behind Chicago for the Central Division lead.

In other key games, Houston inflicted Utah's heaviest-ever home defeat, Memphis produced a big comeback to beat Philadelphia and Golden State welcomed Andrew Bogut back from injury in the win over Toronto.

Denver's Iguodala finished with 13 points, 10 rebounds and seven assists, and had the defensive play of the game when he stole the ball from Paul George as the Pacers' guard maneuvered for a last-second shot.

Iguoadala signaled for time out with 0.5 seconds remaining. On the inbounds, Andre Miller lobbed a pass toward the basket that Iguodala and George both went after with George making contact and getting called for the foul.

After missing four consecutive free throws earlier in the fourth quarter, Iguodala coolly sank the tiebreaker and missed the second on purpose and the buzzer sounded as the ball rattled off the backboard.

The Houston Rockets destroyed the Utah Jazz, winning 125-80 - a margin far in excess of Utah's previous worst home defeat which was by 33 points against Milwaukee in 1980-81.

James Harden scored 25 points for Houston while Carlos Delfino and Marcus Morris each had 4 3-pointers for the Rockets, who sunk 16 3s in all.

The Jazz had won six straight at home but simply couldn't keep pace in transition. They were outscored 26-2 on the break and shot just 39.5 percent. Randy Foye led Utah with 12 points.

The Memphis Grizzlies came from 17 points down to win 103-100 at the Philadelphia 76ers.

Marc Gasol scored a season-high 27 points and Rudy Gay had 26 for the Grizzlies who won despite the absence of injured point guard Mike Conley.

The Grizzlies took control late in the fourth. Gay grabbed a rebound and made it 101-100 on a bucket with 13.3 seconds left. Philadelphia's Thaddeus Young missed a short attempt in front of the basket and the Grizzlies grabbed the rebound. Gay was fouled and made both free throws for a three-point cushion.

Evan Turner scored a season-high 27 points for the Sixers.

Golden State's Bogut had 12 points in his return as the Warriors downed the Toronto Raptors 114-102.

David Lee had 21 points and 12 rebounds, while Stephen Curry scored 17 points before leaving with an injury.

Aaron Gray had a career-high 22 points and 10 rebounds for the Raptors.

The Brooklyn Nets made it eight straight home wins by beating the Orlando Magic 97-77.

The Nets tied a franchise record with their 11th victory in January and can break it when they host Miami on Wednesday.

Nikola Vucevic had 18 points and nine rebounds for the Magic, who lost their sixth straight.

Chicago's Jimmy Butler had a career-hight 19 points as the Bulls beat the Charlotte Bobcats 93-85 while the Sacramento Kings ended a four-game skid by edging the Washington Wizards 96-94, with Isaiah Thomas sinking a floater with a second to play.

Comments
Topics mentioned in this article
Detroit Pistons Andre Iguodala NBA
Get the latest Cricket news, check out the India cricket schedule, Cricket live score . Like us on Facebook or follow us on Twitter for more sports updates. You can also download the NDTV Cricket app for Android or iOS.