Andre Miller scored 24 points, including two free throws with 12.8 seconds left, and Denver survived Bryant's late scoring barrage in a 43-point performance, avoiding playoff elimination with a 102-99 victory over Los Angeles on Tuesday and trimming the Lakers' series lead to 3-2. 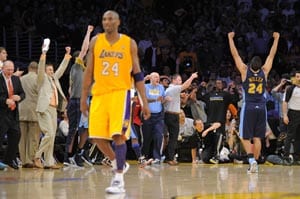 Andre Miller scored 24 points, including two free throws with 12.8 seconds left, and Denver survived Bryant's late scoring barrage in a 43-point performance, avoiding playoff elimination with a 102-99 victory over Los Angeles on Tuesday and trimming the Lakers' series lead to 3-2.

McGee had 21 points and 14 rebounds for the sixth-seeded Nuggets, who barely survived a frenetic finish. Denver had a 15-point lead midway through the fourth quarter against the lifeless Lakers, but Bryant engineered a swift comeback before his final three shots missed.

"I was just glad we didn't go to overtime," Miller said. "There was too much energy in the building. A veteran team like that will fight their way back, and they know how to finish games. We found a way to contain them."

Los Angeles had two more chances to tie after the veteran Miller's free throws, but Bryant and Sessions missed 3-pointers near the buzzer.

"It definitely means a lot, but we're still down, and we still have games to win - in a row, at that," said McGee, who had the best game of his first career playoff series. "It's really hard to stop Kobe, but if we stop the bigs, then Kobe can do what he does, and we'll have a really good chance to win."

Game 6 is Thursday night in Denver. The third-seeded Lakers are one win from a second-round date with Oklahoma City, but they've still got work to do.

Coach George Karl gratefully fed Bynum's offhanded post-practice comment to his players, and they played like a team that isn't going anywhere.

"I've been blessed to win a few series, and it's the hardest thing in the world to win the fourth game," Karl said. "I don't care who you're playing, it's hard. ... His feeling on closeouts is a little different than mine."

McGee threw down a mind-boggling array of dunks and converted alley-oop passes while dominating the Lakers' superstar duo of 7-footers. McGee dunked on a 60-foot alley-oop pass from Miller early in the fourth quarter, and he stared down the Lakers' fans after dunking while getting fouled with 6:35 to play.

Arron Afflalo scored a career playoff-high 19 points and Danilo Gallinari added 14 for the Nuggets, while rookie Kenneth Faried had 10 points and nine rebounds. Miller scored 10 points in the fourth quarter and 17 in the second half, calmly leading his young teammates to the win.

The Nuggets still must win two games to advance to the second round for just the second time in nine years, but they have already accomplished something rare by winning Game 5. Los Angeles had closed out a playoff series on the first try in 11 of its previous 12 opportunities, and the Lakers won 12 of their last 13 closeout games under departed coach Phil Jackson.

"That's true, closeouts can be easy," Bryant said. "Tonight wasn't one of those nights. ... Did it pump them up? Probably. You never want to give anybody bulletin board material, but if you're going to be a champion, you've got to play through things like that."

Bynum had 16 points and 11 rebounds for the Lakers, who lost a closeout playoff game at home for the first time since May 4, 2006, against Phoenix.

The Lakers thought they had taken control of the series with a final-minute rally to win a tight Game 4, but the Nuggets have outplayed the third-seeded Lakers for long stretches of the series. Denver was sharper and more determined from the opening tip in Game 5, while the Lakers played a disorganized, disinterested 31/2 quarters until the late rally.

The Lakers never trailed in the first two games of the series, but they never led in Game 5 after their very first basket made it 2-0. Denver enforced its preferred speedy tempo on the walk-it-up Lakers for long stretches, repeatedly beating the Lakers back with fast breaks and sharp passes.

"They were daring us to take outside shots," Lakers coach Mike Brown said. "We were getting shots we couldn't make. But to me, that's not the difference in the game. There were so many things we could have done to win this ballgame. ... I'm more disappointed in our defense and our lack of protecting the paint."

Pau Gasol had just nine points and 10 rebounds for the Lakers, while Matt Barnes scored 11 points.

The Lakers failed to complete their first playoff series victory under Brown exactly one year after Dallas swept the Lakers in the second round of last year's postseason, ending 11-time NBA champion coach Jackson's career - for now, anyway.