Mike Scott scored 19 points, Kyle Korver 14 and DeMarre Carroll 12 for the Hawks, who led by as many as 13 points in the third quarter. 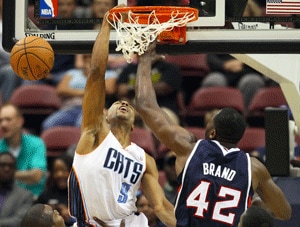 Rookie guard Dennis Schroder scored on a runner with 2.1 seconds left to lift the Atlanta Hawks to an 87-85 victory over the Charlotte Bobcats in a preseason game on Tuesday.

Mike Scott scored 19 points, Kyle Korver 14 and DeMarre Carroll 12 for the Hawks, who led by as many as 13 points in the third quarter.

Ramon Sessions had 17 points and Kemba Walker 12 for Charlotte, which overcame 36.8 percent shooting to lead twice in the fourth quarter, the last at 79-77 on Jannero Pargo's 3-pointer with 4:04 remaining.

Sessions tied the game 85-all on a free throw with 43.7 seconds left, but missed the second shot. Pargo then missed a 3 with 18 seconds left that would have put the Bobcats ahead.

After Schroder gave Atlanta the lead, Pargo bounced another 3 off the back of the rim at the buzzer.