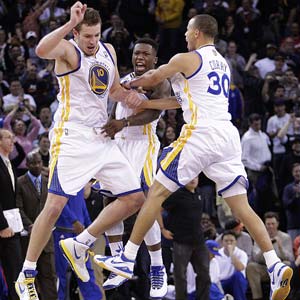 Monta Ellis added 20 points and eight assists for the Warriors, who won their second straight from Dallas following a six-game losing streak. Klay Thompson had 13 points in the Warriors largest margin of victory this season.

Dirk Nowitzki scored 22 points to lead the Mavericks, who lost their seventh straight on the road, including three in the past three nights. Jason Terry added 15 points and Rodrigue Beaubois had 12 as Dallas suffered its worst loss of the season.

Comments
Topics mentioned in this article
NBA Stephen Curry
Get the latest updates on India vs Australia and check out  Schedule, Results and Live Score. Like us on Facebook or follow us on Twitter for more sports updates. You can also download the NDTV Cricket app for Android or iOS.