Cricket will always be No. 1 in India, says NBA star Chris Bosh

Chris Bosh is also optimistic that an Indian player would make it to NBA ranks in the near future though he is yet to see firsthand potential of the hoopsters in this country. 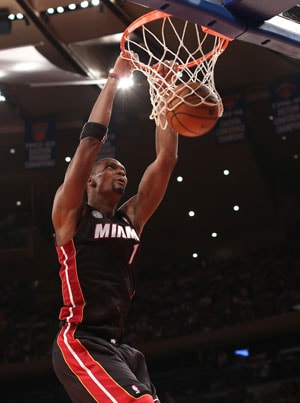 NBA star Chris Bosh is confident that basketball will catch up with other sports in India in popularity but conceded that cricket will remain number one in fan following just like American football is in his home country.

"I think cricket will always be the national sport but it is always great to love another sport and other people to see what else is out there," Bosh told PTI in an interaction here during his maiden visit to the country to promote basketball.

Bosh is also optimistic that an Indian player would make it to NBA ranks in the near future though he is yet to see firsthand potential of the hoopsters in this country.

"I have heard about different guys in college who have the ability to develop their talent. Given the right situation, it is not going to be long.

"I am sure it will be very exciting. Once an Indian player makes it to NBA, kids will watch that and they will know even they can do it," said the American star who has been part of the two-time NBA championship-winning side Miami Heat.

"I think the work we are doing here will go a long way. There are other ways through which you can get people's interest. With the development of technology and social media, the people of India can see what a great game it is. People can see an NBA game. (They will) play if they like it or still remain a fan," he said.

As founder of the 'Chris Bosh Foundation' for sports, he will collaborate with NBA to be one of the spokespersons of the game and try to develop the sport in India.

"I will probably coordinate with NBA here. They brought me here, otherwise I never would have had the chance to come here. It is great that the NBA is here.

"Hopefully, one day I will be able come back and be one of the spokespersons for basketball here. This is is a once in a lifetime experience. As I grow as a person, I have the ability or have the chance to come back, if I do, I will try and grow the game," he said.

Bosh, who was also part of the Olympic gold medal-winning United States team in 2008 at Beijing, said he doesn't want to represent his country in the Games again, as he wanted to spend time with his family.

"I don't think so. I have kids and a family. Our summers are short. We work so hard during season that I want to give them some time in summer.

Bosh was part of Miami Heat side that won the title in 2012 and defending it successfully this year after switching over from Toronto Raptors, a team he was associated for seven years till 2010.

He described the shift from the Canada NBA franchise as a difficult one, adding that his stint with his former club had helped him grow as a player.

"It was a very difficult decision but I am happy I made it. Toronto was a great place for me, where I grew a lot as a player. Miami was that chance to take it to the next step. I am really glad we (Miami Heat) won, it shows that I made the right decision," he said.

He said his present side has helped him understand the concept of team work.

"It has taught me a lot more about team concept, what you have to give up to be on a good team, how difficult it is to come together as a team and succeed. The bond that you create when you go through tough situations with guys.

"And I have had such a good time with the team and we have made bonds that will last a lifetime because of that," he said.

The 29-year-old hoopster said that the team has to work a lot harder if they want to be amongst the top NBA teams that have played the game.

"We have a lot of work do. We can get a lot better. We have a chance to be mentioned with some of the best teams that have played the game. We know we have the chance. We know we have to work hard and stay focused doing what we are supposed to do and it will happen. We just concentrate and hopefully one day we can say we were one of the best teams to have played NBA," he said.

Asked about the tough teams in NBA, he said, "Every night we need to compete, but of course you have the (Indiana) Pacers, (Chicago) Bulls, (New York) Knicks, the (San Antonio) Spurs. They are always there.

Bosh, who has played nearly a decade in the NBA, said he never thought he could reach the heights he has scaled now.

"My dad played a lot and so it came naturally to me. I found I could play and I enjoyed playing it. It has been that ever since when I first picked up the basketball. I am just fortunate to have the success I have had. I never thought I could make it this far.

"My role model is Kevin Garnett (Brooklyn Nets). As I started getting older and went to high school, I started paying more attention to the NBA. I wanted to be just like him because we play the same position (forward), to do what he did and try to be like him," he concluded.