The Los Angeles Clippers shot 77 percent and scored 46 points in the first quarter, then lost their killer instinct but still led all the way in earning their third straight NBA victory, 106-96 over the Houston Rockets on Wednesday. 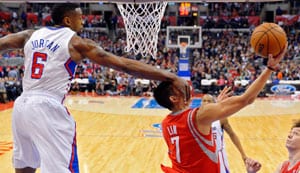 The Los Angeles Clippers shot 77 percent and scored 46 points in the first quarter, then lost their killer instinct but still led all the way in earning their third straight NBA victory, 106-96 over the Houston Rockets on Wednesday.

Caron Butler scored 17 of his 19 points in the opening quarter for Los Angeles. Blake Griffin had 20 points and 11 rebounds, Chauncey Billups had 19 points, and Chris Paul had 10 points and 11 assists as the Clippers started all their regulars again after the lineup had been hit by injuries during their recent Grammy road trip.

"We played great and got a little complacent with the lead," Billups said. "We've shown to lose our discipline sometimes."

Chandler Parsons scored 17 points, Jeremy Lin added 14 points and James Anderson had a season-high 14 for the Rockets, who have lost five straight to the Clippers.

"They came out on fire and we didn't do a good job of making it difficult for them," Lin said. "Once they got in a rhythm, it just kind of snowballed at least in the first quarter."

Lin was set to have an X-ray on his right wrist after a fall in the second quarter. "I think it's fine. It just hurts," he said.

In other games, the San Antonio Spurs beat the Cleveland Cavaliers 96-95 for their 14th win in 15 games, the Toronto Raptors won their fourth straight at the expense of the New York Knicks, 92-88, and Vince Carter passed Larry Bird on the all-time scoring list as the Dallas Mavericks beat the Sacramento Kings 123-100.

Kawhi Leonard made a 3-pointer with 2.9 seconds remaining for visiting San Antonio to edge Cleveland.

The Spurs had stars Tim Duncan, Tony Parker and Manu Ginobili on the floor together for the first time since Jan. 13. Parker led the Spurs with 24 points. Duncan, who had missed eight of the last nine games with a sore left knee, scored 13 points in 25 minutes. Ginobili had five points in nine minutes off the bench after missing nine of the last 13 games with a tight left hamstring

Reserve Alan Anderson's 26 points was one of the few good offensive performances for either Toronto or New York at Madison Square Garden.

Teammate DeMar DeRozan added 20 points for the Raptors, who overcame a 4-for-21 performance from Rudy Gay because Knicks star Carmelo Anthony was just as bad. Anthony finished with 12 points and 12 rebounds but shot 5 of 24 for the Knicks, who dropped their final two games leading into the All-Star break. J.R. Smith led the Knicks with 26 points.

Carter scored 17 of Dallas' last 21 points in the third quarter to help turn aside a Sacramento rally. He made five of seven 3-pointers in the quarter and ended the night with 26 and 21,796 career points for 29th on the all-time list. Bird had 21,791.

The Kings lost their 18th regular season game in a row in Dallas.

The Brooklyn scored a season-high total in beating the Denver Nuggets 119-108, Paul George posted his first career triple-double with 23 points, 12 rebounds and a career-high 12 assists as Indiana snapped a two-game skid with a 101-77 win over Charlotte, and the Atlanta Hawks blew away the Orlando Magic 108-76 for their ninth consecutive regular-season win over their division rivals.

Comments
Topics mentioned in this article
NBA Los Angeles Clippers Blake Griffin Chris Paul
Get the latest Cricket news, check out the India cricket schedule, Cricket live score . Like us on Facebook or follow us on Twitter for more sports updates. You can also download the NDTV Cricket app for Android or iOS.