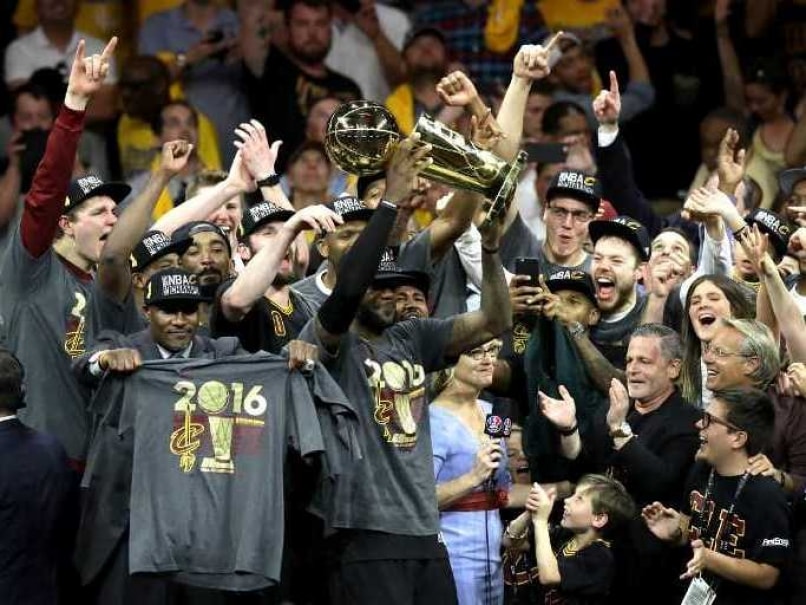 LeBron James of the Cleveland Cavaliers holds the Larry O'Brien Championship Trophy after defeating the Golden State Warriors 93-89 in Game 7 of the 2016 NBA Finals at ORACLE Arena.© AFP

The Cavaliers won the best-of-seven series 4-3 to claim the first league crown in their 46-season history and deliver the first major sports champion to Cleveland since the 1964 NFL Browns, ending the longest such title drought for any American city.

James had 27 points, 11 rebounds and 11 assists, and Irving finished with 26 points for Cleveland, which erased a 3-1 series deficit to win the title.

Draymond Green had 32 points, 15 rebounds and nine assists for the Warriors, whose bid for back-to-back titles was thwarted. Golden State won an NBA-record 73 games in the regular season, then fell short in the playoffs. They went scoreless in the last three minutes of the final game.

"We were able to put together some spectacular games down 3-1," a tearful James said moments after the victory. "This is special.

"I kept that positive attitude. I don't know why we had to take the hard road. Against all odds."

'This is for you'

"Cleveland, this is for you," James screamed on the court after the frantic final seconds.

"King" James had only the third statistical "triple double" in the seventh game of an NBA Finals, joining Jerry West in 1969 and James Worthy in 1988.

James, in his sixth consecutive finals and seventh overall, led the series with 29.7 points, 11.3 rebounds and 8.7 assists plus more than two steals and two blocked shots a game -- the greatest all-around numbers ever produced with a crown on the line.

Only two other clubs down 3-1 in the finals had ever forced a seventh game, none in 50 years until the Cavaliers epic comeback.

It was only the fourth time in 19 NBA Finals seventh games that the road team won, the first time since Washington captured the 1978 title in Seattle.

The winner-take-all showdown captured the attention of US President Barack Obama, who watched the end of the game on Air Force One after returning from a family trip, and commanded high-priced fans, courtside tickets with a face value of USD 8,500 being resold for as much as USD 49,500.

Fans saw a thriller after six lopsided prior outcomes in the historic series.

James made three free throws and added a 3-pointer to give the Cavaliers an 89-87 lead, but Klay Thompson's layup lifted the Warriors level with 4:39 to play.

The teams each went six possessions without scoring after that, time and again thwarting their rivals until Irving's 3-pointer.

After another Cavaliers' stop, James was fouled by Green as he tried for a title-clinching slam dunk. Instead, he made a free throw to produce the final margin and the Warriors could not close the gap in the dying seconds.

The Warriors had not lost three games in a row since 2013.

The Warriors took their biggest lead at 54-46 but back-to-back 3-pointers by J.R. Smith and an Irving layup pulled the Cavaliers level early in the third quarter.

Curry scored the next five points but then went 0-for-4 with three turnovers over more than three minutes and Cleveland went on an 14-2 run, Irving scoring 10 in the spurt that gave the Cavaliers a 68-61 advantage.

Back came Golden State, Green hitting three free throws and a 32-pointer in a 15-7 run to seize a 76-75 edge entering the fourth quarter after 17 lead changes and nine ties.

Green scored 22 first-half points, hitting 8-of-10 shots from the floor and 5-of-5 from 3-point range after an 0-for-10 showing from beyond the arc in his prior three games.

Green had four 3-pointers and a 3-point play in the second quarter and scored nine points in a 12-5 run that gave Golden State a 47-40 lead.

He also had six rebounds and five assists in sparking Golden State to a 49-42 half-time edge as Warriors top scorers Thompson and Curry combined to shoot 5-of-17 overall and 3-of-12 in 3-pointers.

James led the Cavaliers in the first half with 12 points, eight rebounds and five assists but also made four turnovers.

Comments
Topics mentioned in this article
Cleveland Cavaliers Golden State Warriors LeBron James Kyrie Irving Basketball NBA Other Sports
Get the latest updates on IPL 2021, IPL Points Table , IPL Schedule 2021 , live score . Like us on Facebook or follow us on Twitter for more sports updates. You can also download the NDTV Cricket app for Android or iOS.