Paul Pierce scored 10 of his 25 points in the fourth quarter, Kevin Garnett added 21 points and eight rebounds, and the Boston Celtics made an impressive late rally for a 94-85 victory over the Los Angeles Clippers on Monday. 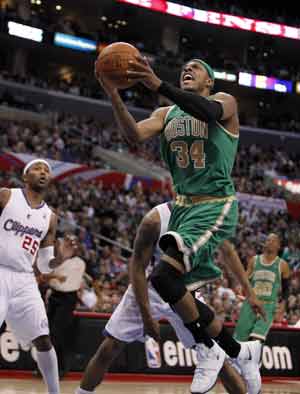 Paul Pierce scored 10 of his 25 points in the fourth quarter, Kevin Garnett added 21 points and eight rebounds, and the Boston Celtics made an impressive late rally for a 94-85 victory over the Los Angeles Clippers on Monday.

Ray Allen scored 15 points and Rajon Rondo had 12 points and 10 assists for the Celtics, who won on the road for just the second time in nine games, but only after blowing a 10-point lead in the final minutes.

Blake Griffin had 24 points and nine rebounds for the Clippers, who have lost four of five while falling behind the Lakers atop the Pacific Division. Chris Paul had 14 points on 3-for-12 shooting in his second game wearing a clear protective mask over his broken nose.

The game featured wild momentum swings and one-sided rallies. The Celtics led 71-61 with 81/2 minutes to play, but the Clippers responded with a 17-3 run, taking the lead on Griffin's free throws with 4:57 left when Brandon Bass fouled out.

Boston scored the next nine points, capped by Pierce's 3-pointer with 2:47 left, and finished a 13-2 run with Mickael Pietrus' layup for a seven-point lead. Los Angeles got to 87-84 on Griffin's putback dunk with 59 seconds left, but the Celtics hung on to split the first two games of an eight-game trip, their longest of the season.

Mo Williams scored 21 points off the bench as the Clippers lost their second home game in two days - and their fifth in seven - during a stretch in which they'll play six games at Staples Center in eight days. The Clippers will become the first NBA team to play 20 games in a month since the Cincinnati Royals did it in February 1967.

Paul, whose nose was broken three days ago in San Antonio, combined with Caron Butler and DeAndre Jordan for 9-for-35 shooting for the Clippers, who outrebounded the NBA's worst rebounding team 45-31.

Although the game was the clubs' only meeting of the season, both came out with a noticeable physical edge to their games.

Griffin and Boston's Greg Stiemsma got matching technical fouls for jostling in the first quarter, while Garnett and Jordan traded trash talk and angry posturing before getting their own matching T's in the second quarter. Boston coach Doc Rivers got the fifth technical foul of the half for a furious reaction to a non-call, and the Clippers took their first lead of the game moments later on Williams' 3-pointer.

The Clippers went ahead during a 12-0 run that included Williams' six points and an alley-oop pass to Griffin for a behind-the-head dunk. Los Angeles led 48-39 at halftime, finishing the half on an 18-6 surge.