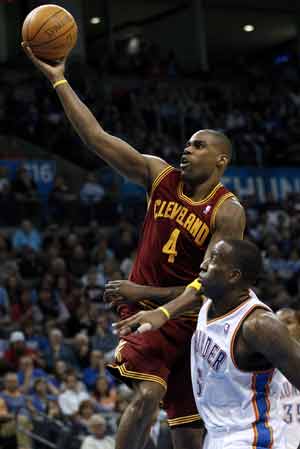 The Cavaliers scored their first consecutive road wins of the season by turning the normally fast-breaking Thunder into a half-court team. Oklahoma City converted only three transition baskets until trying to make a dramatic comeback in the final minute.

Neither team led by more than five until the final minute, when the Cavaliers were putting the finishing touches on a 12-0 run spearheaded by Irving.

Irving drove for a pair of layups to put Cleveland ahead and then found Jamison wide open under the basket for a layup to make it 90-85.

Kevin Durant tried to lead Oklahoma City back, but missed on a pair of 3-point attempts. He finished with 23 points and Russell Westbrook scored 19 for the Thunder.

Comments
Topics mentioned in this article
Cleveland Cavaliers Detroit Pistons NBA
Get the latest updates on India vs Australia Series, check out the India vs Australia Schedule for 2020-21 and Ind vs Aus live score . Like us on Facebook or follow us on Twitter for more sports updates. You can also download the NDTV Cricket app for Android or iOS.