The Knicks ended an 11-game losing streak in Boston as Carmelo Anthony scored 28 points and won his rematch with Kevin Garnett in New York's 89-86 victory over the Celtics on Thursday. 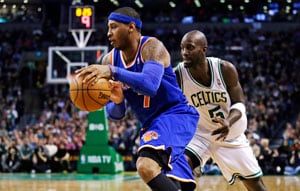 The Knicks ended an 11-game losing streak in Boston as Carmelo Anthony scored 28 points and won his rematch with Kevin Garnett in New York's 89-86 victory over the Celtics on Thursday.

It came 17 days after a verbal clash between the All-Star forwards led to Anthony's one-game suspension following Boston's 102-96 victory in New York.

Anthony was booed frequently on Thursday but there was no sign of hostility with Garnett. At one point, Anthony even extended his hand to a fallen Garnett and helped the Celtic to his feet.

Rajon Rondo led the Celtics with 23 points, 10 rebounds and 11 assists. Garnett had only eight points but finished with a game-high 12 rebounds.

Toronto's DeMar DeRozan swished in a fadeaway jumper at the final buzzer as the Raptors fought off a late-game charge to beat the Orlando Magic 97-95.

DeRozan led Toronto with 22 points, followed by Amir Johnson with 21 points and 10 rebounds. It was Johnson's sixth double-double of the season.

Goran Dragic scored 19 of his 24 points in the first half and the Phoenix Suns held on to beat the Los Angeles Clippers 93-88 and improve to 2-0 under interim coach Lindsey Hunter.

Marcin Gortat added 15 points, including two free throws with 23.3 seconds left. Luis Scola and Markieff Morris had 14 apiece for the Suns, who had not won two in a row since a season-high, four-game winning streak ended on December 19.

The Clippers, who lost their third straight, were without Chris Paul for the fifth time in seven games because of a bruised right kneecap. The team is 3-2 without him.

Comments
Topics mentioned in this article
NBA Kevin Garnett
Get the latest Cricket news, check out the India cricket schedule, Cricket live score . Like us on Facebook or follow us on Twitter for more sports updates. You can also download the NDTV Cricket app for Android or iOS.