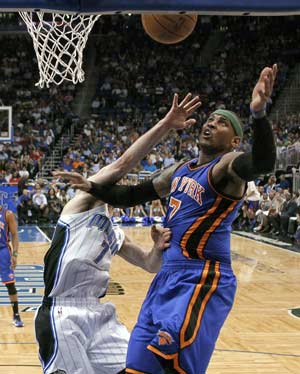 J.R. Smith and Toney Douglas each added 15 points for the Knicks, who won for just the third time in their last 13 visits to Orlando. New York also hit 13 3-pointers.

The Magic's loss came on the heels of coach Stan Van Gundy's comments Thursday morning that he'd heard from top team officials that Dwight Howard has asked that he be fired.

Howard was held to just eight points and eight rebounds.

Orlando has now lost five straight games for the first time since 2007.

Even with Monroe playing well, Pistons coach Lawrence Frank went with the 37-year-old Wallace down the stretch to help stop John Wall's penetration.

The Wizards were missing Nene and Trevor Booker with foot injuries, but rallied from a 20-point deficit to pull within five late in the game. Wall finished with 28 points and 10 assists, while Kevin Seraphin had 15 points before fouling out.

Comments
Topics mentioned in this article
NBA Tyson Chandler Orlando Magic Dwight Howard
Get the latest Cricket news, check out the India cricket schedule, Cricket live score . Like us on Facebook or follow us on Twitter for more sports updates. You can also download the NDTV Cricket app for Android or iOS.