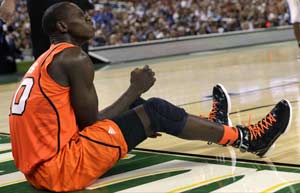 Relying on offensive rebounding and Pitino's savvy, Louisville kept it close before fading in a 69-61 loss to in-state rival Kentucky in the Final Four on Saturday night.

Louisville (30-10) got off to a jittery start and had a hard time matching up with Kentucky's stable of future NBA players. The Cardinals kept clawing back, though, turning 19 offensive rebounds into 13 second-chance points to twice rally from double-digit deficits.

"They offensive rebounded against us better than any team we played this year," Wildcats coach John Calipari said. "They never stopped playing. They got up into our bodies, created turnovers and gave themselves a chance to win."

But even with one of college basketball's best in-game coaches pulling the strings, Louisville couldn't keep up with the speedy Wildcats for the entire 40 minutes. Top-seeded Kentucky (37-2) shot 57 percent to reach Monday's championship game against Kansas or Ohio State.

The fourth-seeded Cardinals managed to slow down Kentucky's Michael Kidd-Gilchrist (nine points), but AP Player of the Year Anthony Davis did pretty much whatever he wanted, getting 18 points, 14 rebounds and five blocks.

Peyton Siva had 11 points and Chane Behanan added 10. Gorgui Dieng had 12 rebounds and blocked four shots for Louisville, which shot 35 percent from the floor.

Pitino pulled off one of his best coaching jobs this season, taking a program with no true stars into the Final Four for the first time since 2005. The Cardinals were riddled with injuries and limped to the finish of the regular season, yet managed to turn it on at the right time.

With the 59-year-old Pitino calling the shots, Louisville reeled off four wins in four days at the Big East tournament and played seemingly a different style in each of its first four NCAA tournament games.

Even for a coach who led spunky Providence to the 1987 Final Four, this was impressive.

Pitino needed all his skills against Kentucky, the school he coached to the 1996 national championship.

Playing with six, maybe more, future NBA players, the Wildcats had an advantage at seemingly every position.

It didn't help that the Cardinals seemed overwhelmed by the take-the-rivalry-to-a-new-level atmosphere of the Final Four.

Out of sorts at the start, Louisville fumbled away passes, put up shots that didn't come close to hitting the rim, let Kentucky seemingly do whatever it wanted on offense.

Siva, Louisville's catalyst all season, was shaky early, throwing passes off teammates' legs, missing both his shots before sitting the final 7 minutes of the first half after picking up his second foul.

Dieng was just as jittery, playing timidly instead of with his usual aggressiveness. He missed a two-handed dunk on an open drive down the lane and seemed unprepared whenever the ball came to him.

The rest of the team wasn't much better, struggling to stop Kentucky on defense or to get anything to fall from anywhere.

Yet, with all those struggles, the Cardinals kept finding a way to keep it close.

Down 10 in the first half, they chipped it to three late. Their deficit up to 13 early in the second half, they tied it 49-all on Siva's 3-pointer with 9 minutes left.

Pitino was a big part of it, using on-the-fly adjustments and in-huddle encouragement to help the Cardinals keep up with what is generally considered the most talented team in college basketball.

When Dieng struggled early, his coach sat knee-to-knee with him in what appeared to be a keep-your-head-up moment in the first half.

When Kentucky made a run in the second half, Pitino called for the Cardinals to extend their pressure, creating turnovers that allowed them to fight back.

Louisville just ran out of steam and scheme as Kentucky stretched the lead in the closing minutes to send the Cardinals back to the Bluegrass state two wins short of their goal.