The Chicago Bulls put together a 19-0 points run spanning the second and third quarters to overturn a deficit and beat the Brooklyn Nets 96-85 on Saturday, closing within three games of the NBA Central Division lead. 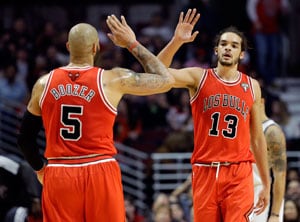 The Chicago Bulls put together a 19-0 points run spanning the second and third quarters to overturn a deficit and beat the Brooklyn Nets 96-85 on Saturday, closing within three games of the NBA Central Division lead.

Joakim Noah had 21 points and 10 rebounds while Carlos Boozer scored 20 points for the Bulls, who began March on a winning note after going 5-8 in February; just their second losing month in 21/2 seasons under coach Tom Thibodeau.

Also Saturday, Philadelphia ended a seven-game skid by beating Golden State, Milwaukee downed Toronto in overtime and Portland earned only their second win in almost a month by defeating Minnesota.

Chicago's Noah followed up the third triple-double of his career with another terrific performance that also included four blocks. He committed five turnovers, but it was an impressive follow-up to Thursday's gem, when he had 23 points, 21 rebounds and a career-high 11 blocks in a win over Philadelphia.

Brook Lopez led Brooklyn with 22 points - 14 in the first quarter.

Philadelphia's Evan Turner had 22 points, 10 rebounds and nine assists while Jrue Holiday scored 27 as the 76ers won 104-97 against the Golden State Warriors.

The Sixers, who are 51/2 games behind Milwaukee for the final playoff spot in the Eastern Conference with 25 games left.

Stephen Curry scored 30 for the Warriors, who've lost four in a row.

Milwaukee's Monta Ellis scored six of his 23 points in overtime and Ersan Ilyasova and Brandon Jennings added five apiece in the extra period to spark the Bucks to a 122-114 win over the Toronto Raptors.

Comments
Topics mentioned in this article
NBA Lionel Messi
Get the latest Cricket news, check out the India cricket schedule, Cricket live score . Like us on Facebook or follow us on Twitter for more sports updates. You can also download the NDTV Cricket app for Android or iOS.