Bright day for Los Angeles as Clippers, Lakers both win

The Los Angeles Clippers arrested their four-game losing skid while their city rivals the Los Angeles Lakers provided a rare bright spot in their dire season by beating the NBA-leading Oklahoma City Thunder on Sunday. 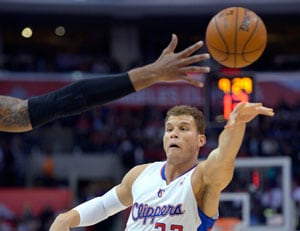 The Los Angeles Clippers arrested their four-game losing skid while their city rivals the Los Angeles Lakers provided a rare bright spot in their dire season by beating the NBA-leading Oklahoma City Thunder on Sunday.

The Clippers were again without star guard Chris Paul but this time his teammates picked up the slack and beat the Portland Trail Blazers 96-83.

The Lakers stood firm in the closing stages to hold off the Thunder and win 105-96, temporarily easing the gloom around the heralded title contenders who have a disappointing 19-25 record. The defeat cost Oklahoma City the league lead, dropping below San Antonio.

In other key games, Carmelo Anthony led New York to a tight win over Atlanta and Boston had a bittersweet night, beating Miami in double overtime but learning that guard Rajon Rondo will miss the rest of the season.

In the absence of Paul, it was Blake Griffin (23 points and nine assists) and stand-in point guard Eric Bledsoe (10 points, five assists and five rebounds) who played the key roles in the win over Portland.

All-Star forward LaMarcus Aldridge led the Trail Blazers with 21 points and 11 rebounds but the visitors were never in the contest.

The Lakers beat the Thunder 105-96, with Kobe Bryant having 21 points, 14 assists and nine rebounds.

Steve Nash added seven of his 17 points in the final 51/2 minutes as the Lakers coolly maintained a small lead in the closing stages.

Kevin Durant scored 35 points for road-weary Oklahoma City, who finished their longest trip of the season at 3-3.

The New York Knicks edged the Atlanta Hawks 106-104 thanks chiefly to the efforts of Anthony, who tied a franchise record with nine 3-pointers, then converted a go-ahead, three-point play with 12.5 seconds left to cap a 42-point night.

The Hawks shot a season-high 60 percent from the field but had their three-game winning streak snapped when Josh Smith missed a 3-pointer on Atlanta's final possession.

Boston's Rondo will require major surgery to repair a torn anterior cruciate ligament in his right knee which he damaged against Atlanta on Friday. The news put a dampener on the Celtics' 100-98 win over the Miami Heat.

Paul Pierce hit a go-ahead jumper with 31 seconds left in the second overtime to give the Celtics victory.

Kevin Garnett had 24 points and 11 rebounds, and Pierce added 17 points, 13 rebounds and 10 assists for the Celtics, who ended a six-game losing streak, their longest in six seasons.

LeBron James scored 34 points for the Heat, who had won four in a row. It was the first game in Boston for Ray Allen since he left the Celtics after five seasons and signed as a free agent with Miami. He scored 21 points.

The New Orleans Hornets rode the hot shooting of Ryan Anderson to a 91-83 win over the Memphis Grizzlies.

Anderson scored 22 points connecting on seven 3-pointers. Anderson was 7 of 13 from the field, all of his attempts coming from outside the arc. Fellow reserve Jason Smith was 5 of 7 from the field for 16 points.

Zach Randolph led Memphis with 20 points and 13 rebounds for his league-leading 28th double-double.

In other games, the Dallas Mavericks had a 110-95 win over the Phoenix Suns to celebrate Shawn Marion's 1,000th game, while the Detroit Pistons downed the Orlando Magic 104-102 with Brandon Knight scoring a career-high 31 points including five 3-pointers.