Rajon Rondo had 15 points and 15 assists, and scored the final three points of the Celtics' 93-91 overtime victory on Sunday that evened the Eastern Conference finals at two games apiece. 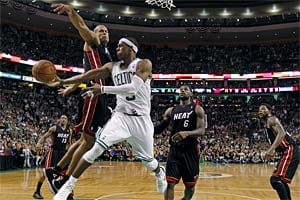 Rajon Rondo had 15 points and 15 assists, and scored the final three points of the Celtics' 93-91 overtime victory on Sunday that evened the Eastern Conference finals at two games apiece.

Getting a huge break when LeBron James fouled out for the first time since joining the Heat, the Celtics recovered after blowing an 18-point lead in regulation and need two victories for a third trip to the NBA finals in five years.

Garnett added 17 points and 14 rebounds for the Celtics, while Paul Pierce scored 23 points before fouling out. Ray Allen finished with 16 points.

James had 29 points and Wade scored 20 after another dismal start for the Heat, who host Game 5 on Tuesday.

"Not stressed the series is tied 2-2," James said. "It's great basketball, great competition. We wanted to get one up here and we didn't."

In a game that started as a Celtics blowout and turned into a foul- and tension-filled fourth quarter, followed by the second overtime in this series, the Celtics held on when Wade missed a potential winning 3-pointer on the last possession.

"It was a good look. It was online but didn't want to go in," Wade said. "Got the shot off I wanted and that is all you can ask for."

Mickael Pietrus drew James' sixth foul and grabbed two huge offensive rebounds that created a lengthy possession for the Celtics, who lost Game 4 in overtime in a second-round series against the Heat last year with a chance to tie the series.

This time, they overcame their second-half stall on the offensive end by limiting the Heat to just one basket in overtime, by Udonis Haslem, who finished with 12 points and 17 rebounds.

"At the end you have a chance to win after 50-plus minutes and losing the MVP. Hey, you'll take that," Heat coach Erik Spoelstra said.

Rondo's layup gave the Celtics a 92-91 lead with 2:34 left, and neither team scored again until he made a free throw with 21 seconds to play. Wade, already finding it tough to locate any room with Chris Bosh out and then having to do it with James also on the sideline, saw his potential winning attempt bounce off the rim as time expired.

"I don't ever think I've seen that before," Allen said of James and Pierce fouling out. "But Rondo's on the floor, I'm on the floor, Kevin's on the floor, Wade's on the floor. All that has to happen at that point is the game has to be won. We don't care what it looks like. We had plenty."

In what could have been the final Beantown game for the Celtics' Big Three, Boston scored 61 points in a sensational first half that concluded with some televised trash talk from Rondo. But the Celtics managed only 12 points in the third quarter, and Wade finally got going after managing just eight points on 2-of-11 shooting in the first half.

"Our execution in the first half was flawless," Rivers said. "It was as good as maybe we've had. And then we just got away from it."

With the Celtics down by two, Pierce and Rondo made consecutive layups for an 85-83 edge with 3:08 to go in regulation. But with the Celtics up three, they lost James, who was wide open with plenty of time to set himself for a 3-pointer that evened it at 89 with 37.5 seconds left.

Garnett was called for an offensive foul on the next possession, giving the Heat the ball back with 21 seconds left. But they passed it around too long, leaving them with a long forced attempt from Haslem that was well off before the buzzer.

The videoboard kept encouraging fans to get louder, as if they needed any prompting in what could have been the final time they got to watch the Big Three together.

Fans who left and stayed away for years during the Celtics' lean years started coming back in the 2007-08 season after Garnett and Allen were traded to Boston to form an All-Star trio with Pierce, the Garden almost always full as the Celtics won a championship, played in two finals and returned the franchise back to its traditional place atop the East.

But the aging group was nearly broken up when the Celtics sputtered through the first half of the shortened season, and it seems doubtful they'll be back together after this season.

The fans grew even louder when the Celtics ran out to a 14-4 lead after consecutive 3-pointers by Pierce and Allen. The Celtics went to Garnett for their next two baskets, pushing it to 18-4, and when Pierce's 3-pointer made it 21-6, it was the third time in four games they had a lead of at least 15 points.

And after leading the Celtics to the highest-scoring half the Heat have surrendered this postseason, Rondo even fired a shot at the visitors, saying in his televised halftime interview what was working for Boston was the Heat "complaining and crying to the referees in transition."

The feisty point guard didn't back down after the game, either.

It was so hard for the Heat early that James didn't even make his first basket, the Celtics accidentally tipped in his miss, and it was credited to him as the closest player. But Miami finally got untracked when Garnett left for a rest, getting a number of easy baskets to get within six before the Celtics regained control and went ahead 34-23 after one.

The Celtics made 16 of their first 25 shots and seemed intent on outhustling the Heat to the ball on the rare times they did miss. And the Heat, who insisted they would be more aggressive, didn't shoot their first free throw until James was fouled while making a basket with 6:53 remaining in the first half.

Boston pushed the lead to 18 when Pierce shook off a foul and tossed in a long, one-legged jumper with 3:12 left in the second quarter, and the Celtics were ahead 61-47 at the break.

The Celtics averaged 89.1 points on 44 percent shooting in an ugly second-round survival against Philadelphia, then managed a measly 79 points in the opener of this series, the old guys looking like their best basketball was well behind them. They seemed to have solved their offensive woes, then managed only 12 points in the third quarter, losing Rondo along the way to his fourth foul.

It was down to 73-68 after three, and the Heat tied it for the first time when James' layup made it 74-all with 8:54 remaining. Norris Cole's layup on the next possession gave Miami the lead for the first time and it stayed tight from there.

Comments
Topics mentioned in this article
Rajon Rondo Kevin Garnett NBA
Get the latest Cricket news, check out the India cricket schedule, Cricket live score . Like us on Facebook or follow us on Twitter for more sports updates. You can also download the NDTV Cricket app for Android or iOS.