The Boston Celtics held off a late Los Angeles challenge to edge the Clippers 106-104 in the NBA on Sunday, improving to a 4-0 record since losing Rajon Rondo to a season-ending knee injury. 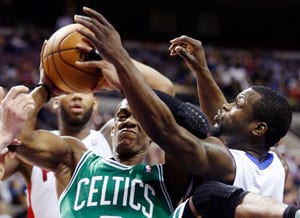 The Boston Celtics held off a late Los Angeles challenge to edge the Clippers 106-104 in the NBA on Sunday, improving to a 4-0 record since losing Rajon Rondo to a season-ending knee injury.

On a day in which the NBA carried on in the shadows of the NFL's Super Bowl, Miami notched its 10th straight win over Toronto while the Los Angeles Lakers had narrow victory over Detroit.

Boston's Paul Pierce scored 22 points while Jeff Green and Leando Barbosa each had 14 for the Celtics who clung on to beat the Clippers.

Los Angeles had pulled to 103-101 on a 3-pointer by Eric Bledsoe with 56 seconds remaining. But Avery Bradley drew an offensive foul on Los Angeles' Jamal Crawford with 26 seconds to go, and Pierce held on to the ball before making a 3-pointer with 2.5 seconds left to clinch the win.

The Clippers were led by Bledsoe, replacing Paul, and Crawford, who made a 3-pointer at the buzzer, with 23 points each.

Miami's LeBron James scored 30 points and Chris Bosh had 28 against his former team as the Heat downed the Toronto Raptors 100-85.

The Heat clinched the best record in the Eastern Conference through Feb. 3, meaning coach Erik Spolestra will coach the East in the All-Star game. Had Miami lost, New York Knicks coach Mike Woodson would have been in charge of the East's bench.

The Los Angeles Lakers won 98-97 at the Detroit Pistons, due in no small part to the efforts of Pau Gasoil, who had 23 points and 10 rebounds and contested Detroit's last-second alley-oop attempt to clinch the win.

The Lakers blew an 18-point third-quarter lead but went back ahead on a three-point play with 1:09 remaining. That gave the Lakers a 98-95 lead, and they held on despite missing four free throws in the final 16.8 seconds.

Kobe Bryant scored 18 points for the Lakers, who have won five of six despite missing the injured Dwight Howard for the past two.

Greg Monroe had 20 points for Detroit.