The Portland Trail Blazers set a record for the most points by a visiting team at San Antonio, pulling off a shock 136-106 win over the Spurs on Friday, costing the Texans top spot in the NBA standings. 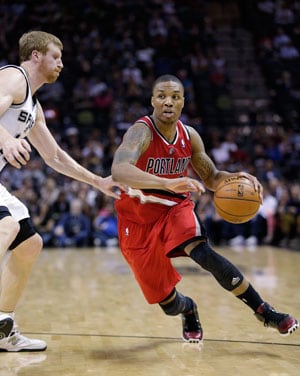 The Portland Trail Blazers set a record for the most points by a visiting team at San Antonio, pulling off a shock 136-106 win over the Spurs on Friday, costing the Texans top spot in the NBA standings.

Portland's Damian Lillard had 35 points and nine assists as the Blazers handed the Spurs their heaviest loss of the season.

In other key games, Houston overcame a horrendous shooting performance to beat Golden State, Boston blew a big lead but recovered to beat Atlanta in overtime, Chicago beat Utah by the finest of margins, and Memphis held off Cleveland.

Tim Duncan had 18 points to lead the Spurs, who were playing their third straight game without All-Star point guard Tony Parker. San Antonio had difficulty keeping pace with Portland's athleticism in losing for only the fourth time in 29 home games this season.

Miami matched the 12th-longest winning streak in NBA history and became the first team in the league to clinch a playoff spot this season.

Down by nine in the third quarter, the Heat took a 76-75 lead when James beat the buzzer to end the period with a 3-pointer, then took control with what became a 17-4 run over a 5-minute stretch of the fourth.

Thaddeus Young scored 25 points, for the 76ers, who lost their 12th straight on the road and 13th straight regular-season game against Miami.

Houston's Chandler Parsons scored 26 points and James Harden had 20 points and 11 assists as the Rockets beat the Golden State Warriors 94-88.

Stephen Curry had 24 points and eight assists for Golden State.

Boston's Jason Terry hit a tiebreaking 3-pointer with 35 seconds left in overtime to help the Celtics to a 107-102 win over the Atlanta Hawks.

The Celtics blew a 12-point fourth-quarter lead and trailed by four in overtime before outshooting the Hawks from beyond the arc.

Jeff Green, Paul Pierce and Terry all hit 3-pointers in the OT and the Celtics held the Hawks without a point for the final 1:20 to clinch Boston's fifth straight win. Pierce finished with 27 points, seven rebounds and seven assists.

Josh Smith scored 32 points for the Hawks, who outscored the Celtics 48-32 in the paint.

Chicago's Marco Belinelli made a 3-pointer with 5.9 seconds left to lift the Bulls over the Utah Jazz 89-88.

Belinelli connected on the fallaway 3 to put Chicago in front to stay. Gordon Hayward missed a jumper on the other end for Utah, and Butler secured the rebound as the horn sounded.

Belinelli and Carlos Boozer had 22 points apiece for Chicago.

Al Jefferson scored 23 points in his return to the lineup for the Jazz.

Memphis' Marc Gasol scored 22 points as the Grizzlies held off a late run for a 103-92 win over the Cleveland Cavaliers.

Memphis, which strengthened its hold on the fourth spot in the Western Conference playoff race, has won 11 of 12, all since trading star forward Rudy Gay to Toronto. The Grizzlies' previous victory in Cleveland came nine years earlier, in LeBron James' rookie season with the Cavaliers.

Oklahoma City's Kevin Durant had 19 points and seven assists as the Thunder defeated the Charlotte Bobcats 116-94 for their fourth straight victory.

Indiana's Paul George had 25 points and Tyler Hansbrough added 18 as the Pacers used a big first half to roll past the Orlando Magic 115-86.

Los Angeles' Kobe Bryant hit the tying 3-pointer with 5 seconds left in regulation, then dunked for the go-ahead basket with 10 seconds left in overtime, helping the Lakers beat the Toronto Raptors 118-116.

Brooklyn's Deron Williams made an NBA-record nine 3-pointers in the first half, finished with 11 and scored a season-high 42 points to lead the Nets past the Washington Wizards 95-78.

Dallas' O.J. Mayo scored 22 points as the Mavericks held on to beat the Detroit Pistons 102-99 when Charlie Villanueva missed a 3-pointer in the final seconds.

Sacramento's Isaiah Thomas scored 27 points and Tyreke Evans had 25 for the Sacramento Kings, who defeated the Phoenix Suns 121-112.