Blake Griffin had 19 points and 13 rebounds and Caron Butler scored 17 points to lead the playoff-bound Clippers to a 95-82 victory over the Timberwolves on Thursday. 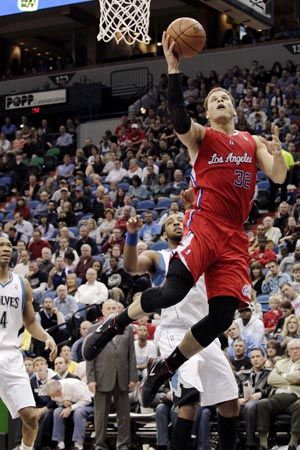 Blake Griffin had 19 points and 13 rebounds and Caron Butler scored 17 points to lead the playoff-bound Clippers to a 95-82 victory over the Timberwolves on Thursday.

Mo Williams had 14 points and five assists in his return for the Clippers, who entered the night 11/2 games behind the Lakers for the third seed in the West and just a 1/2 game ahead of Memphis for the fourth seed.

"It's great to get a win no matter what, especially at this time of year when we're fighting for spots," said Griffin, whose Clippers improved to 15-14 on the road and haven't finished with a winning road record since relocating to L.A. in 1984. "It's a great win for us."

Michael Beasley had 14 points and 10 rebounds and J.J. Barea had 10 points and 11 assists for the Timberwolves, who have lost eight straight games. They've lost 24 in a row in the month of April dating back to 2009.

The Wolves were playing without All-Star Kevin Love, who missed the game with a mild concussion, the latest in a long line of injuries that derailed a once promising season.

The Clippers made 12 3-pointers and turned 17 Minnesota turnovers into 24 points. Butler hit 5 of 8 from deep and the Clippers outscored Minnesota 20-6 in the first nine minutes of the final period to blow the game open.

Williams was 6 for 11 in his first game since March 22. He missed 11 straight with a sprained big toe on his left foot, but he's returning just in time to get back into a groove before the playoffs.

There was a little panic in Lob City when the Clippers lost eight of 11 games in March and appeared to be sliding down the Western Conference ladder. But they appear to be picking up steam at just the right time, with 10 wins in their last 12 games as the playoffs approach.

"It felt great. The team was in a great rhythm so I just didn't want to mess up the rhythm the team was playing with," Williams said. "I just wanted to step right in and do whatever I can to help the team."

The loss officially eliminated the Wolves from playoff contention, but they've been out of the conversation for quite some time.

The Timberwolves took the first three games of the season series, including two at Staples Center, but it was an entirely different team that took the court on Thursday. Ricky Rubio has been out since March 9 with torn ligaments in his left knee and Love missed the game with a concussion suffered in Denver on Wednesday.

The Wolves were also missing Luke Ridnour (ankle) and Wayne Ellington (back spasms), and it appeared like the Clippers took the short-handed Wolves a little too lightly in the early going.

The signs were there from the beginning, with Griffin missing a wide open, uncontested dunk and starting the game 2 for 7. The Wolves were shooting 53 percent to take a lead into halftime.

Griffin finally started taking advantage of Love's absence in the fourth, throwing down three dunks and scoring on a back-down in the post during the deciding 20-2 run.

Barea left in the final three minutes of the second quarter after being cut on the chin. He had 10 points and 10 assists in the first half, but picked up his fourth foul midway through the third quarter and was held to just one assist in the second half.

Anthony Randolph had 16 points, nine rebounds and three blocks and Nikola Pekovic scored 17 for the Wolves.

"Five down going into the fourth quarter and just could not make a shot," Wolves coach Rick Adelman said. "Just ran out of gas."

Comments
Topics mentioned in this article
NBA Anthony Randolph Michael Beasley Los Angeles Clippers Minnesota Timberwolves
Get the latest updates on India vs Australia Series, check out the India vs Australia Schedule for 2020-21 and Ind vs Aus live score . Like us on Facebook or follow us on Twitter for more sports updates. You can also download the NDTV Cricket app for Android or iOS.