Al Horford scored 19 points in his first start since January, and the Atlanta Hawks held on for an 87-86 victory over the Boston Celtics in a thrilling Game 5 of the Eastern Conference playoffs on Tuesday. 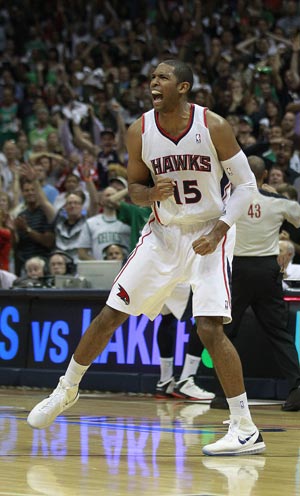 Al Horford scored 19 points in his first start since January, and the Atlanta Hawks held on for an 87-86 victory over the Boston Celtics in a thrilling Game 5 of the Eastern Conference playoffs on Tuesday.

The Celtics lead the series 3-2 heading back to Boston for Game 6 on Thursday. If the Hawks can steal one on the road, the deciding game would be Saturday in Atlanta.

Boston had a chance to clinch the series when Rajon Rondo stole Josh Smith's inbounds pass with 10 seconds remaining and raced down the court, looking for the winner. But he got hemmed in along the sideline and Smith knocked away a desperation pass, the ball rolling away as time ran out.

A relieved Smith collapsed on the scorer's table.

Paul Pierce and Kevin Garnett led the Celtics with 16 points apiece. Rondo had 13 points and 12 assists, and the last of his five assists gave Boston a chance to end the series early and get some much-needed rest.

But there's still work to do.

The Hawks kept their season going, getting a huge contribution from a player who wasn't there for much of it. Horford went down in January with a torn pectoral muscle, missing the rest of the regular season and the first three games of the playoffs. But he made a surprise return in Game 4, one of the few bright spots in an embarrassing 101-79 loss that gave the Celtics command of the series.

Boston headed to Atlanta intent on wrapping things up, but Horford clearly wanted to play a little longer after missing so much time. He led fast breaks and dived on the court for loose balls, not the least bit worried about reinjuring himself. In addition to leading the Hawks in scoring, he grabbed 11 rebounds, dished out three assists, came up with three steals and blocked three shots.

Smith clearly looked hobbled by a sore knee, but still managed 13 points and 16 rebounds. Jeff Teague had 16 points, while Joe Johnson and Marvin Williams had 15 apiece, giving Atlanta double-figure scoring from all five of its starters in a revamped lineup.

In a back-and-forth game, the Celtics tied it at 83 on Ray Allen's 3-pointer from the corner, capping a quick 7-0 run.

The Hawks called time out and set up a play that reclaimed the lead for good. Teague drove into the lane and dumped it off to Horford for an uncontested dunk.

After Garnett missed a jumper in the lane, Johnson ran down the shot clock looking as though he had every intention of shooting. But, at the last possible second, he rifled a pass to Horford coming off the wing. The big center threw up a sort of pseudo-hook with Garnett and Brandon Bass all over him. The ball bounced around the rim before falling through with 1:34 left, giving the Hawks an 87-83 lead.

With less than a minute to go, after misses by Pierce and Horford canceled each other out, Pierce was inexplicably left open for a 3-pointer. He swished it, pulling the Celtics within a point. They wouldn't get another, even with a couple of chances.

Teague missed an open 3 for the Hawks, giving Pierce a look at the go-ahead shot. But his 18-foot jumper with Johnson in his face barely touched the bottom of the net, falling harmlessly out of bounds while Pierce looked around in disbelief, believing he must have been fouled.

Rondo's steal gave the Celtics one more chance, but they never actually got a shot off.

Boston appeared to have the momentum, closing the third quarter on a Rondo-led 10-0 spurt that cut Atlanta's 12-point lead down to a mere basket. The Celtics kept it going early in the fourth, pushing out to a 73-69 edge on Allen's 3-pointer with 8 1-2 minutes remaining.

But no lead was safe in this topsy-turvy game. The Hawks ripped off a 14-3 run. The Celtics called time out and scored seven straight of their own, capped by another 3 by Allen.

Looking to spark his team and generate more offense, Atlanta coach Larry Drew juggled his lineup for Game 5. Horford's first start since his injury wasn't totally surprising, given the center had 12 points and five rebounds off the bench in the 22-point blowout.

Perhaps more significantly, the Hawks started Williams at small forward and shifted Johnson to shooting guard, hoping that would create mismatches and give Atlanta's top scorer more offensive chances. He took only eight shots in Game 4, a totally unacceptable number that had some wondering if Horford's return disrupted the offense more than it helped.

No one is questioning him now.