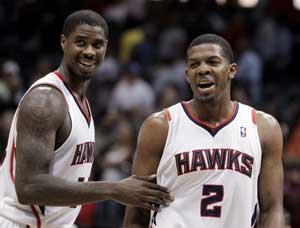 The four overtimes tied for the third-longest game in NBA history. It was the ninth NBA game to go four OTs and the first since Phoenix beat Portland 140-139 on November 14, 1997.

Al Jefferson finished with 28 points and 17 rebounds, and Paul Millsap had 25 points and 13 boards for the Jazz before both players fouled out in the final overtime.

Atlanta has won four straight and six of seven. The Hawks improved to 30-20 and moved one-half game ahead of Indiana for fifth place in the Eastern Conference.

Johnson ended the first quarter with 18 points after going 8 of 8 in the period. He missed eight of his next nine shots, including a potential game-winning runner with 3 seconds left in regulation, before hitting a 3-pointer that forced the third overtime.

Jeff Teague, who had 18 points and nine assists, added a pair of free throws with 13 seconds to go to make it 137-133. Johnson's two free throws sealed the victory with 5.5 seconds remaining.

Smith fouled out with 1:57 left in the first overtime.

Zaza Pachulia, who pulled down 20 rebounds, hit a short jumper in the final seconds of the second quarter that gave the Hawks a 17-point lead, their biggest of the game.

Utah rallied with a 27-9 run, giving the Jazz their first lead since early in the opening period. Millsap's 16-footer made it 65-64 with 3:23 left in the third.

The Jazz, who have won only one road game when they trailed after three quarters, fell to 7-17 away from home. They began the day as one of six teams separated by 1 1/2 games for the final five playoff spots in the Western Conference.

Utah's biggest lead in regulation came when Gordon Hayward's two free throws made it 93-89 with 5:31 left in the fourth.

Hayward scored 19 points and Devin Harris handed out 10 assists for the Jazz.