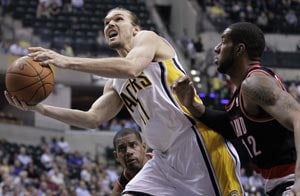 Amundson shot 10 for 11 from the field and grabbed eight rebounds for the Pacers. His previous season high in scoring was 11, but he had 13 points in the fourth quarter alone.

Indiana led by as many as 29 points.

LaMarcus Aldridge scored 17 points and Nolan Smith added 10 for the Trail Blazers, who shot a season-low 31.3 percent from the field and made a a season-low 20 field goals. Portland's five assists were the fewest by an NBA team this season.

Comments
Topics mentioned in this article
NBA Indiana Pacers
Get the latest Cricket news, check out the India cricket schedule, Cricket live score . Like us on Facebook or follow us on Twitter for more sports updates. You can also download the NDTV Cricket app for Android or iOS.