Spencer Hawes officially knocked off Chicago in Game 3 with a late jumper that capped a 14-point rally. 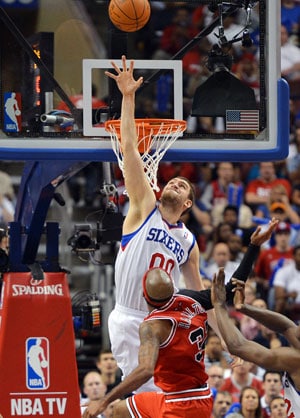 Spencer Hawes officially knocked off Chicago in Game 3 with a late jumper that capped a 14-point rally.

The top-seeded Bulls can only hope injuries won't finish them in this series.

With Derrick Rose already out with a knee injury, the Bulls received a second serious scare when Joakim Noah crashed down on his side and clutched his sprained left ankle.

With one misstep, the Bulls are on the rocks.

Hawes led a Philadelphia fourth-quarter comeback to remember, letting a late go-ahead jumper fly from just inside the 3-point arc to help the Sixers rally from 14 down to beat the Chicago Bulls 79-74 on Friday night and take a 2-1 lead in their Eastern Conference playoff series.

The Bulls can't afford any more injuries to their stars - or else the surprising Sixers could be the team advancing to the next round.

"I'm hoping this win tonight will take a little pressure off them," coach Doug Collins said.

The eighth-seeded Sixers are halfway toward eliminating the Bulls. They won Game 2 in Chicago with Rose out and stormed back in a fourth quarter where Noah was limited to 2 minutes. Noah left the arena on crutches and was wearing a protective boot.

Noah, who finished with 12 points, has little time to recover. Game 4 is Sunday in Philadelphia.

"We have to have a mental toughness to get past all that," Bulls coach Tom Thibodeau said. "We've had injuries all year and you deal with it."

Hawes scored 10 of his 21 points in the fourth, grabbed nine rebounds and buried the winner with 2:11 left to give the Sixers their first lead since halftime.

Philadelphia scored only 11 points in the third quarter and trailed by double digits early in the fourth before taking off against the battered Bulls.

Hawes keyed the surge and buried two free throws to pull the Sixers to 71-70 with 3:28 left.

Comments
Topics mentioned in this article
NBA Spencer Hawes Muhammad Ali Chicago Bulls Philadelphia 76ers Rory McIlroy Omer Asik Lionel Messi
Get the latest Cricket news, check out the India cricket schedule, Cricket live score . Like us on Facebook or follow us on Twitter for more sports updates. You can also download the NDTV Cricket app for Android or iOS.