Andre Iguodala finished with 16 points, seven rebounds and four assists as the Philadelphia 76ers rallied to beat the Boston Celtics 92-83 in game four of their Eastern Conference series. 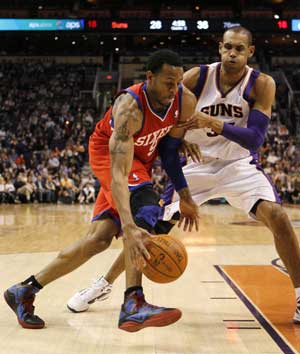 Andre Iguodala finished with 16 points, seven rebounds and four assists as the Philadelphia 76ers rallied to beat the Boston Celtics 92-83 in game four of their Eastern Conference series.

Evan Turner also had 16 points and Lou Williams finished with 15 points and eight assists for the Sixers who levelled the best-of-seven series at 2-2.

"We just kept fighting. I kept telling our guys to 'keep battling' and something good was going to come out of that," said Sixers coach Doug Collins.

"What we did wasn't pretty, we just grinded it out."

Game five is scheduled for Monday in Boston.

Philadelphia rallied from 18 points down at one point to win it down the stretch, scoring the final nine points of the game.

Williams scored 13 of his points in the second half and Iguodala nailed the go-ahead jumper in the final two minutes. Philadelphia's bench outscored the Celtics' bench 44-12.

Paul Pierce scored a game-high 24 points and Rajon Rondo finished with 15 points and 15 assists for Boston who lost two of three games to the Sixers during the regular season.

The Celtics scored the first 14 points of the game and led by 15 at halftime.

Fifth seeded Boston has won five straight Atlantic Division crowns since bringing in future Hall of Famers Kevin Garnett and Ray Allen to team with Pierce. They punched their ticket to the second round by eliminating fourth-seeded Atlanta in six games.

Philadelphia also advanced in six games, becoming just the fifth eight-seed in NBA history to dispose of a number one by ousting the injury-plagued Chicago Bulls.

Comments
Topics mentioned in this article
NBA Andre Iguodala Detroit Pistons Philadelphia 76ers
Get the latest Cricket news, check out the India cricket schedule, Cricket live score . Like us on Facebook or follow us on Twitter for more sports updates. You can also download the NDTV Cricket app for Android or iOS.