Patna Pirates came back from the dead to tie their match against Haryana Steelers 41-41 in the fifth Pro Kabaddi League on Saturday. 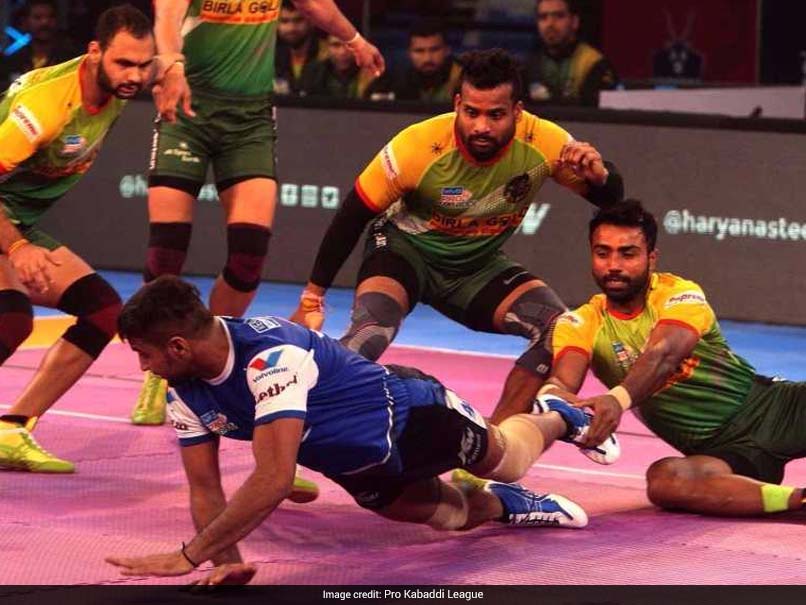 Patna Pirates came back from the dead to tie their match against Haryana Steelers 41-41.© Pro Kabaddi League

Patna Pirates came back from the dead to tie their match against Haryana Steelers 41-41 in the fifth Pro Kabaddi League on Saturday. Pardeep Narwal, who had a disappointing first half, ended up scoring 13 points to script Patna's recovery, while Haryana steelers blew their first half advantage. Wazir Singh scored 12 points for Haryana Steelers. Patna Pirates are second in Zone B after 10 matches with 36 points whereas Haryana Steelers moved to second spot in Zone A with 41 points from 10 matches. Haryana Steelers raiders got into the act quickly and scored three points in two minutes to lead 3-1. Monu Goyat scored two raid points in four minutes as Patna Pirates trailed 2-4.

Haryana Steelers managed to keep Pirates danger man Pardeep Narwal quiet for the first 10 minutes and inflicted an all out in the 11th minute to lead 15-7.

Surender Nada and Mohit Chhilar were rock solid at the back as they didn't let Patna score too many raid points.

Pardeep could muster just one bonus point in the entire half even as Surjeet Singh and Wazir combined to score 11 points in the first half to help Haryana led 22-12 at the break.

Haryana Steelers began the second half in style as they forced an all out in the 21st minute to lead 26-14. Pardeep finally made a successful raid in the 23rd minute as Patna Pirates trailed 15-28.

With his team looking down in the dumps, Pardeep came up with a super raid in the 29th minute to as Patna reduced the deficit to 21-32.

Pardeep scored another raid point as Patna inflicted an all out in the 30th minute to further reduce the margin to 26 -32 and they were trailing by five points with less than five minutes to go.

In the 36th minute, Patna Pirates cut the lead to just two points after Monu Goyat made a super raid. Patna then inflicted an all out in the 37th minute to lead 38-37.

Wazir's two raid points in a minute helped Haryana Steelers tied the match at 39-39 in the 38th minute. It was all square in the last minute with both teams tied at 41-41.