ISL: Mumbai City FC returned to winning ways after a 2-1 win against Kerala Blasters FC at the GMC Stadium in Bambolim on Wednesday. 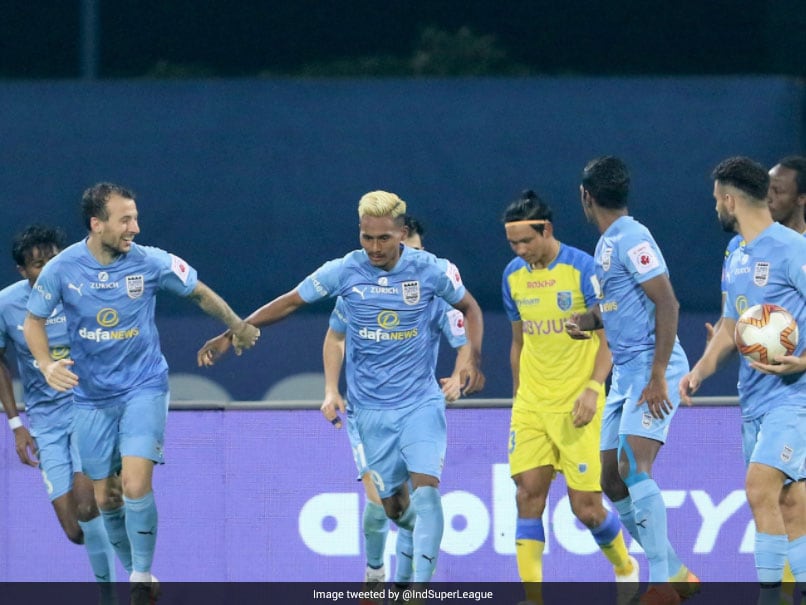 Kerala Blasters squandered a lead once again as Mumbai City FC came from behind to win 2-1 in the Indian Super League (ISL) at the GMC Stadium, Bambolim, on Wednesday. After missing many chances, Adam Le Fondre's 67th-minute penalty proved decisive after Bipin Singh (46') had earlier cancelled out Vicente Gomez first-half goal (27'). Kerala made three changes as Bakary Kone, Prasanth Karuthadathkuni and Yondrembem Denechendra found places in starting XI, while for Sergio Lobera's Mumbai, Adam Le Fondre, Vignesh Dakshinamurthy, and Cy Goddard were given a start.

The first half was an exciting affair filled with plenty of action including a goal, missed chances, and some goalkeeping heroics from both teams. Raynier Fernandes came close in the eighth minute but his shot from outside the box went just over the bar.

Then it was Le Fondre who had one of the best chances of the game. In the 11th minute, he danced his way past two Kerala defenders, but his shot from a narrow-angle beat both the keeper and the post. Le Fondre was handed yet another chance when Hugo Boumous pounced on a loose pass, drove forward, and set Le Fondre through but the Englishman shot wide.

While the strikers were misfiring for Mumbai, their goalkeeper was at his best. Amrinder Singh dived fully to deny Kone from scoring a header. He then denied Rahul KP from close and frustrated Jordan Murray too.

From the resulting corner, Kerala took the lead. Sahal Abdul Samad sent in a perfect delivery in the area where Gomez got off his marker and headed in.

Kerala's Albino Gomes was called into action when Bipin evaded a couple of opponents on the flank and crossed to Boumous, but his header was easily saved by the custodian.

The half-time talk from Lobera seemed to have worked on his squad as the Islanders got back into the game soon after the restart.

Le Fondre set Goddard on the right as the latter evaded a tackle from opponents and attempted a shot. However, it took a deflection and went towards Bipin at the far post, who found the back of the net from a tight angle.

Kerala kept pressing but Amrinder stood strong. The keeper continued to frustrate their opponents as he denied Murray and Rahul once again.

At the other end, Mumbai were awarded a penalty when Le Fondre was fouled in the box by Costa Nhamoinesu. This time, Le Fondre didn't make a mistake as he smashed the ball past Albino. Mumbai managed to maintain their one-goal lead till the final whistle to extend their lead at the top.

Kerala Blasters FC Football
Get the latest updates on SA vs IND 2021-22, check out the Schedule and Live Score . Like us on Facebook or follow us on Twitter for more sports updates. You can also download the NDTV Cricket app for Android or iOS.