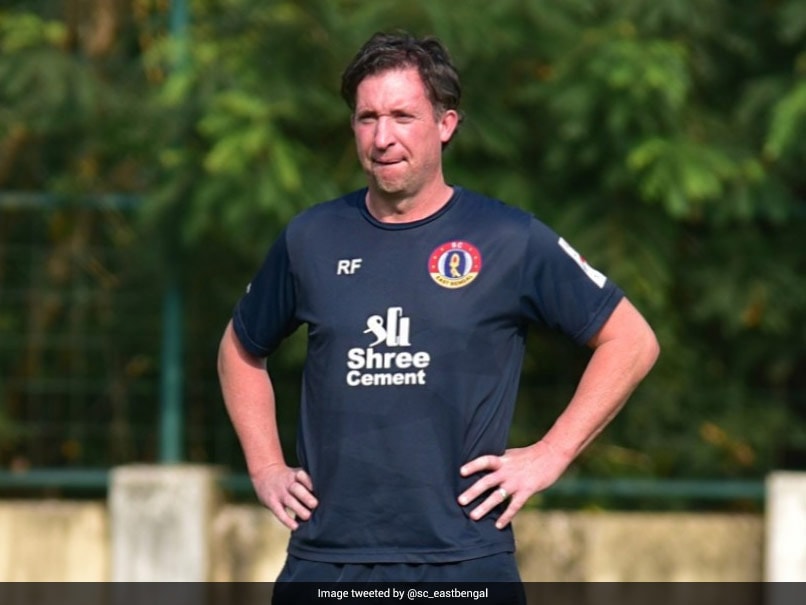 Robbie Fowler was handed the punishment by the AIFF's disciplinary committee.© Twitter

East Bengal football club's high-profile English coach Robbie Fowler was on Wednesday suspended for four matches, and fined Rs 5 lakh after being found guilty of making "insulting" remarks against Indian referees at the ongoing ISL, but the former footballer insisted there was nothing racist about his outburst. Fowler was handed the punishment by the All India Football Federation's (AIFF) disciplinary committee headed by senior lawyer Ushanath Banerjee and comprising Dr Madhav Milan Ghosh, Harsh Vora and Prateek Chadda. Fowler was in the dock for stating that he was "not sure whether the Referees have an Anti-English thing or Anti East Bengal thing" in the ISL being conducted in Goa.

"The Committee held such utterances and publications are gross inconceivable derogatory and contemptuous aspersions apart from blatant malice on the part of Mr. Fowler and tends to offend the dignity, reputation and image of the Referees in India," read the disciplinary panel's detailed order which is in PTI's possession.

The panel asked him to explain what he meant by his statement.

Fowler, according to the committee, did not respond and "said that he never intended to make any racist remarks and no malice was ever intended."

The Liverpool legend had made the controversial remark after East Bengal's 1-1 draw against a 10-man FC Goa in Margaon on January 29. He was charged under Articles 50.4, 58 and 59.1 of the AIFF Disciplinary Code.

Of these, article 59.1 specifically deals with offences related to racist remarks. "...sanctions under Article 59(1)(a) of the Disciplinary Code could have been reasonably imposed upon Mr. Fowler, but the Committee withheld such sanction for the time being...," the order read.

The AIFF panel instead "imposed sanctions of suspension of four matches upon Mr. Robert Fowler with immediate effect and a fine of Rs.5,00,000/ as codified under Article 58 of the Disciplinary Code, to be paid forthwith."

East Bengal had, earlier in the day, backed Fowler and denied that he was charged for making allegedly racist remarks. Fowler has expressed his displeasure with refereeing on more than one occasion in this edition of the league, which is his first.

The 45-year-old had remarked that the referees probably need a "bit of help" after East Bengal were denied at least two penalties in a 0-2 loss against NorthEast United FC in December. Then, after a goalless draw against Chennaiyin FC in January, he termed the refereeing "disgraceful" and had said he's "fighting battles with the referees every single game and it's an absolute joke".

Fowler had also been suspended for one match after receiving his second caution of the season, which forced him to miss their match against Bengaluru FC on January 9. The disciplinary committee held that such comments of Fowler were meant to "impute by innuendos that the referees in India may be hostile toward British people and as such gave intentional unjust decisions against East Bengal."

The Committee also directed the AIFF to "closely monitor the conduct and demeanour" of Fowler in all future AIFF games. It said that even a single case of indiscipline by Fowler would result in "major exemplary sanctions forthwith."

The English great also tendered an apology for his behaviour and said his "intentions had been to protect his players and the team".

SC East Bengal Football
Get the latest updates on India vs South Africa and check out  Schedule, Results and Live Score. Like us on Facebook or follow us on Twitter for more sports updates. You can also download the NDTV Cricket app for Android or iOS.