ISL: SC East Bengal registered their third win in the ongoing edition of the ISL after defeating Jamshedpur FC 2-1 at the Fatorda Stadium. 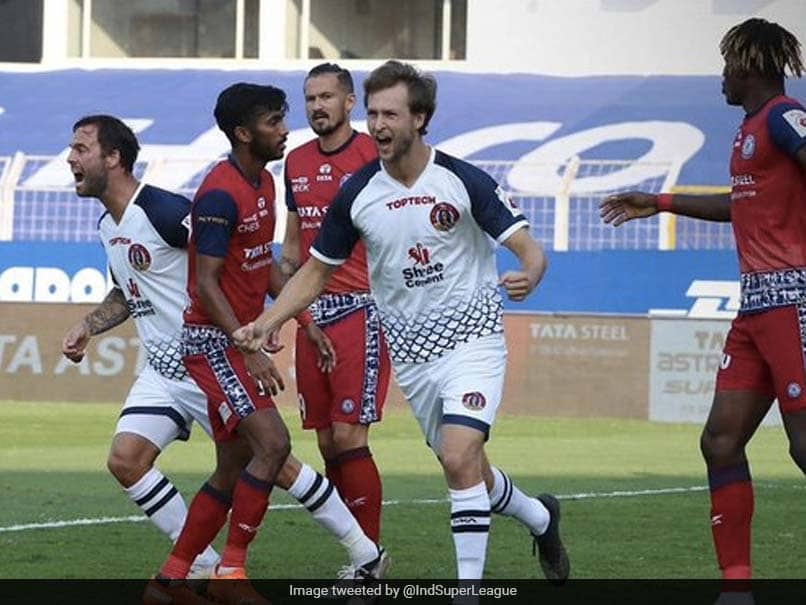 ISL: Matti Steinmann scored early in the first half to give SC East Bengal the lead.© Twitter

SC East Bengal tasted victory for the first time in almost a month's time, with Jamshedpur FC falling victims to a 2-1 win in Indian Super League's early kickoff at the Fatorda Stadium on Sunday. While the Kolkata-based side jumped to 9th on the table with 16 points, Jamshedpur FC's hopes of making the ISL playoffs were dealt with another blow, leaving them 7th, four points behind the playoff places. Goals from Matti Steinmann (6') and Anthony Pilkington (68') secured the victory for SCEB. A late goal from Peter Hartley (83') proved to be a mere consolation for Jamshedpur.

East Bengal got off to the best start possible, with Steinmann putting them ahead in the sixth minute. An early SCEB attack ended with Stephen Eze putting the ball out for a corner.

The resultant corner from Narayan Das eluded the entire Jamshedpur defence, and was glanced in by Steinmann. Any hopes Jamshedpur had of extending their run of three straight clean sheets, had come to an early end.

Owen Coyle's men had scored just one goal from open play in their previous four encounters. As they attempted to make a comeback, the reason was clear. Whatever moves their midfielders were able to string together ended abruptly in the final third, with Jamshedpur's attackers able to get into good positions. With SCEB dominating possession and defending well, Jamshedpur finished the half with zero shots on target. Nerijus Valskis, in particular, cut a frustrated figure often dropping down into midfield in search of the ball.

The Kolkata-based side started the second half as they had the first, with a freekick in a dangerous area. Steinmann again lost his marker and got into a good position, but missed the ball by a whisker.

The next big chance fell to Narayan, who was played in on the left flank. He sprinted towards the Jamshedpur goal, before forcing a fine save from keeper TP Rehenesh.

While East Bengal was dominating proceedings, Jamshedpur nearly found a goal against the run of play in the 63rd minute. After being fed by Farukh Choudhary on the left, Valskis unleashed a shot that bounced off the upright.

Jamshedpur were soon left ruing that miss as SCEB found a second goal. Steinmann turned creator this time, finding Pilkington with a pin-point through ball and the Englishman made no mistake from close range.

Pilkington came close to scoring again, finding the woodwork in the 79th minute. But it was Jamshedpur who got the next goal with Hartley heading in Isaac Vanmalsawma's cross. It later proved to be a mere consolation for the team, as East Bengal held on to their lead till the final whistle. There was a late penalty claim for Jamshedpur in injury time, but the referee did not spot anything amiss.