ISL: Khalid Jamil made a winning start as NorthEast United FC Head Coach in the ISL as the team defeated Jamshedpur FC 2-1 at the Tilak Maidan Stadium, Vasco on Sunday. 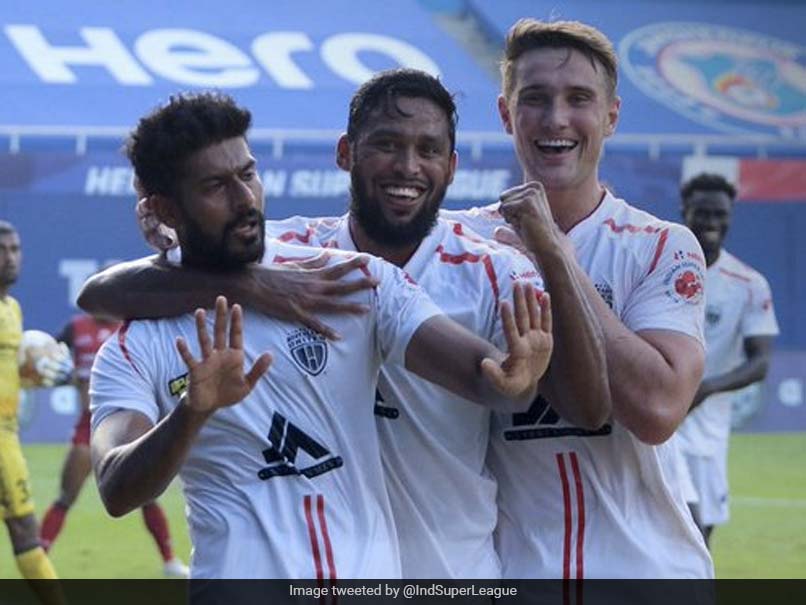 Khalid Jamil made a winning start as NorthEast United Head Coach in the Indian Super League (ISL) as the team saw off Jamshedpur 2-1 at the Tilak Maidan Stadium, Vasco on Sunday. The result ends NEUFC's seven-game winless run and propels them to fifth on the points table. Ashutosh Mehta (36') put NEUFC ahead with his first ISL goal before substitute Deshorn Brown (61') doubled the advantage. Jamshedpur skipper Stephen Hartley (89') pulled one back for his side late in the game, but despite pressing the NEUFC defense hard in the second half, Owen Coyle's side slumped to a third straight defeat.

NEUFC were the better side in the opening half, dominating possession and creating goal-scoring opportunities. It was Jamshedpur who created the first big chance of the game in the 8th minute but NEUFC custodian Subasish Roy Chowdhury denied them the opener. After Jamshedpur won a throw-in, Khassa Camara's poor clearance fell towards Nerijus Valskis, who found Jadhav just outside the box. The youngster, in turn, whipped a cross for Valskis, who controlled the ball and struck on the volley but saw his shot blocked by Chowdhury.

The best chance for NEUFC arrived during the 32nd minute. Luis Machado, a constant livewire in the first half, came close to breaking the deadlock, but Rehenesh did well to keep it out thanks to a brilliant acrobatic effort. Suhair VP delivered a cross for the Portuguese, who attempted an overhead kick which was parried away.

Just four minutes later, NEUFC made amends for it as they scored from a set-piece. Federico Gallego delivered a brilliant cross from the corner flag and Mehta rose above his marker at the far post to head the ball into the net.

Jamshedpur started strong in the second half, pushing their opponents on the back foot. However, a defensive error saw them concede again.

Isaac Vanmalsawma, brought on at half-time, gave the ball away after a sloppy pass. Gallego received the ball from Machado and threaded a through pass for substitute Brown, who slotted it past Rehenesh.

Jamshedpur had a chance to cut short their deficit after Chowdhury put himself in trouble, courtesy of a miscued goal kick. The ball was intercepted by Valskis, who made a run into the box and shot on goal but Chowdhury redeemed himself with a crucial save.

Coyle's side received a glimmer of hope late on in the game after captain Hartley scored through a corner, which was his first for Jamshedpur.

They continued to test NEUFC and could've bagged a dramatic equaliser in injury time, had Valskis not fluffed his chance. Hartley played a long ball for the Lithuanian who blazed his header over the bar.