ISL: Kerala Blasters FC registered a much-needed win as they beat Jamshedpur FC 3-2 at the Tilak Maidan Stadium in Vasco on Sunday. 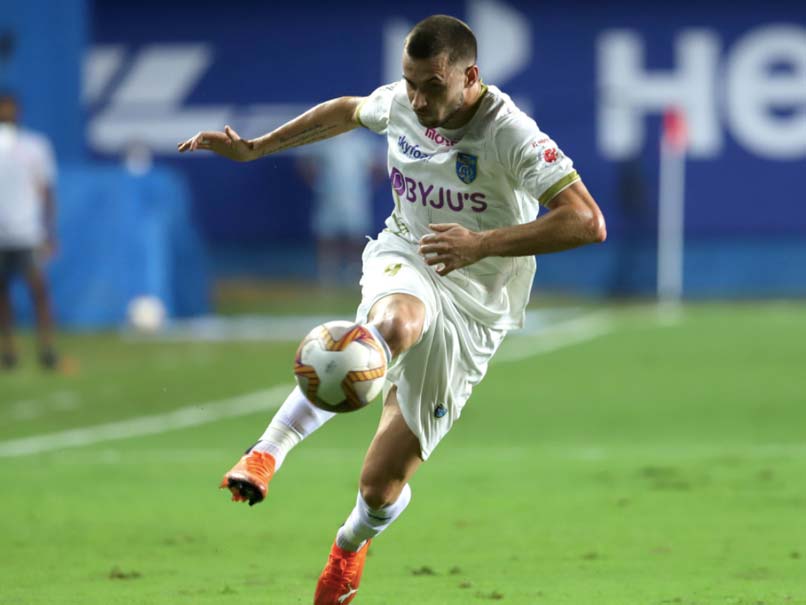 Ten-man Kerala Blasters put up an inspired show to register their second win of this season of Indian Super League (ISL), as they brushed aside Jamshedpur FC 3-2 at the Tilak Maidan Stadium on Sunday. Kerala took the lead early through Costa Nhamoinesu (22') but his opener was neutralised by Nerijus Valskis (36') before the break. The Jamshedpur striker netted once again in the second half (84') but it only came after Jordan Murray's brace (79', 82') which propelled Kerala to seal the game. Both sides went into the break locked in a stalemate, after testing each other and creating a flurry of chances in the first half. As Jamshedpur started strong, it should have bagged the lead as early as the 4th minute after some delightful build-up play. Valskis did well to hold the ball and found Mobashir Rahman, whose cross found Jadhav. But the youngster's effort deflected off the post.

Seven minutes later, Kerala fashioned a gilt-edged opportunity which was the best chance of the opening half. Gary Hooper put Murray through on goal with a decisive pass that split open the Jamshedpur backline. But with only the keeper to beat, the Australian skewed his shot over the bar.

However, Kerala soon made amends for the early miss as they broke the deadlock from a set-piece. Facundo Pereyra swung a delicious cross in the box for Costa, who got ahead of Jamshedpur keeper TP Rehenesh and headed home.

Jamshedpur rallied back soon after conceding and would go on to restore parity from a set-piece after Lalruatthara fouled Alexandre Lima in a dangerous area outside the box. Valskis curled his free-kick over the wall and into the top bottom corner past Kerala goalkeeper Albino Gomes, ending his three-match goalless streak.

Jamshedpur dominated proceedings after the restart, making constant raids into the opposition box but could not find a way. The best chances fell for Jackichand Singh, who struck the woodwork twice. Kerala were reduced to ten men just after the hour mark after Lalruatthara was shown a second yellow card for a rash tackle.

But despite being a man down, two defensive errors from Jamshedpur helped Kerala gain an advantage. They took the lead from a set-piece. After Jessel Carneiro's throw-in was cleared away poorly by Stephen Eze, Pereyra won the ball and tested Rehnesh from close range. The ball fell to Murray on the rebound and he scored a tap-in. A decisive blunder from Rehenesh three minutes later allowed Murray to score again, seeing the shoulders drop in the Jamshedpur dugout.

Valskis got on the scoresheet again to revive Jamshedpur's hopes of a comeback. The striker buried his header into the net from Mobashir's cross to cut short his side's deficit. But in the end, his goal came a little too late as Kerala went home with the three points.

Jamshedpur FC Football
Get the latest updates on ICC T20 Worldcup 2022, check out the Schedule and Live Score. Like us on Facebook or follow us on Twitter for more sports updates. You can also download the NDTV Cricket app for Android or iOS.