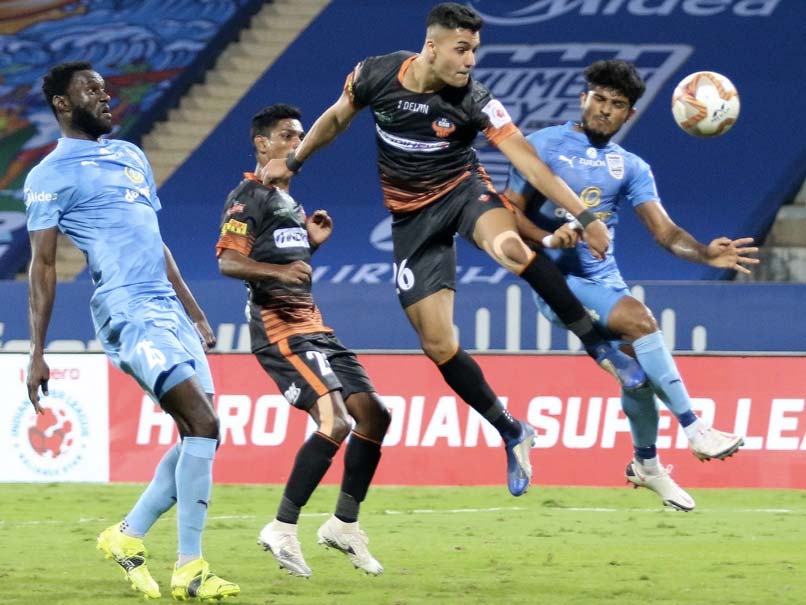 A stoppage-time goal by Ishan Pandita helped FC Goa pull off a thrilling 3-3 draw against Mumbai City FC in an Indian Super League match in Bambolim on Monday. Mumbai took the lead through Hugo Boumous (20th minute) and Adam Le Fondre (26th minute) but goals from Glan Martins (45th minute) and Igor Angulo (51st minute) made it all square for FC Goa. But just when it looked like the match was heading for a draw, Rowllin Borges struck late (90th minute) to put Mumbai ahead only to see his effort cancelled out by Pandita in the dying moments of the game. This is Pandita's second stoppage time strike in the league.

FC Goa are now on a nine-game unbeaten run. Goa dominated the match in terms of possession and passing but Mumbai's defense stood tall denying the Gaurs.

Despite only completing half as many passes as their opponents, Mumbai still managed to walk into the breather with a one-goal cushion.

Sergio Lobera's team relied on counters and had more shots on target. They had four on target of which they converted two.

Boumous was full of life against his former team and fired an early warning when he raced past Adil Khan on the right, and attempted to cut the ball back. But Dheeraj Singh got a firm hand on the ball.

But the Frenchman put his team ahead, scoring from a quick counter in the 20th minute.

Goa were on the attack but Edu Bedia lost the ball to Raynier Fernandes. After the ball fell to Le Fondre, the Englishman released Boumous into acres of space. Boumous took the ball around Dheeraj to score into an empty net.

But an alert Dheeraj managed to keep it out only to see the rebound headed into goal by Le Fondre for his ninth goal of the season.

Glan scored a stunner to reduce the deficit before the break. Jorge Ortiz played a pass to Glan at the halfway line and the new signing, who was making his first start for Goa, fired a thunderbolt which crashed into the Mumbai net.

Goa came out stronger in the second session and restored parity soon. Alberto Noguera whipped in a cross from the left to find Angulo, who managed to time his run perfectly to beat the offside trap and score.

After missing a couple of sitters, Borges finally scored in the 90th minute when he guided in Ahmed Jahouh's free-kick from the left.

But there was still time left for another goal. Goa scored a stoppage-time leveller through Pandita who headed in Bedia's cross.

Mumbai City FC Indian Super League Football
Get the latest updates on SA vs IND 2021-22, check out the Schedule and Live Score . Like us on Facebook or follow us on Twitter for more sports updates. You can also download the NDTV Cricket app for Android or iOS.