ISL: The win took Bengaluru FC to the second spot on the points table with 22 points from 12 matches, while Jamshedpur FC remained static at sixth with 13 points. 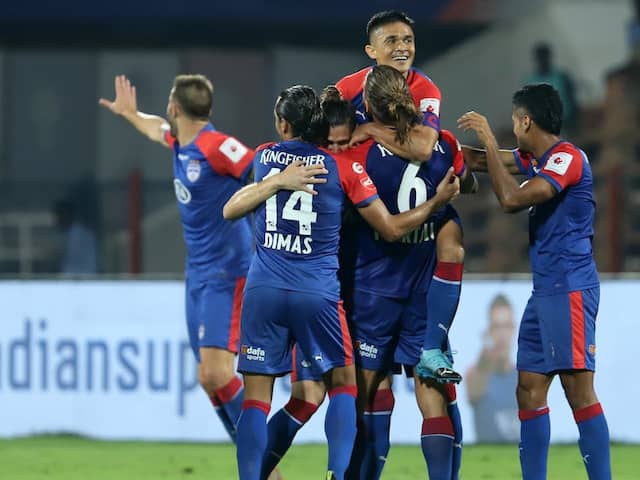 ISL: Erik Paartalu grabbed a goal and an assist as Bengaluru FC reduced the gap at the top.© ISL

Erik Paartalu grabbed a goal and an assist as Bengaluru FC reduced the gap at the top of the Indian Super League (ISL) table with a convincing 2-0 win over Jamshedpur FC at the Kanteerava Stadium in Bengaluru on Thursday. The hosts scored from a set-piece when Erik Paartalu (8') found the back of the net from a Dimas Delgado corner. Sunil Chhetri (63') doubled the lead after the break to put the result beyond doubt. The win took Bengaluru to the second spot on the table with 22 points from 12 matches. Jamshedpur remain sixth with 13 points.

Bengaluru started the game on the front foot and looked the more likely team to break the deadlock. And that's what they did from a Dimas Delgado corner eight minutes into the game. The Spaniard's dangerous delivery was met at the near post by Paartalu who beat Narender Gahlot in the air and sent a powerful header into the net that left goalkeeper Subrata Paul with no chance.

Minutes after taking the lead, hosts' Ashique Kuruniyan dribbled his way out of a crowded area and unleashed a powerful volley that Paul somehow kept out.

Jamshedpur's new signing David Grande had a couple of good moments in the first half, but the team went into the break without registering a single shot on target.

Bengaluru's intensity to keep going forward paid off in the second half as they doubled their lead just after the hour mark. Erik Paartalu played a fine long ball to release Chhetri into the box, who headed the ball forward to take the onrushing keeper out of the equation and slotted home with ease.

Jamshedpur FC Sunil Chhetri Football Indian Super League
Get the latest Cricket news, check out the India cricket schedule, Cricket live score . Like us on Facebook or follow us on Twitter for more sports updates. You can also download the NDTV Cricket app for Android or iOS.