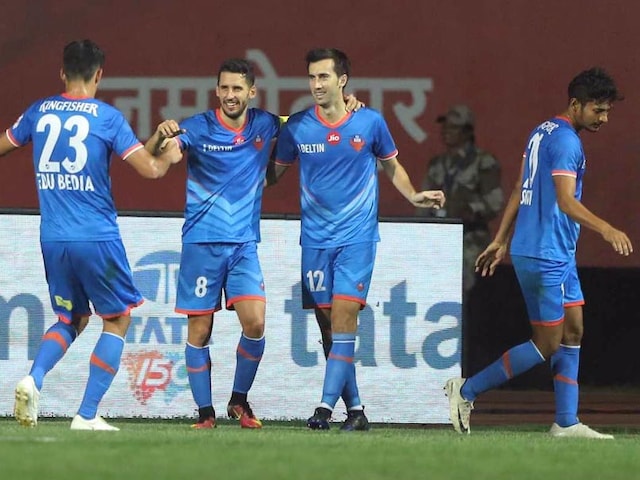 Riding on Spanish striker Ferran Corominas' brace either side of halftime, FC Goa qualified for the Indian Super League (ISL) play-offs in a virtual knockout clash against Jamshedpur FC at the JRD Tata Sports Complex on Sunday. Top-scorer in the league Corominas scored in the 29th and 51st minute with Manuel Lanzarote (69th) adding gloss to the scoreline. Jamshedpur, placed fifth on the points table with 26 points from 17 games, had to win the game to make the cut while a draw would have been enough for the visitors who were on 27 points from 17 games.

Goa, who finished with 30 points, joined Bengaluru FC, Chennaiyin FC and FC Pune City to complete the list of teams who will vie for the silverware this season.

In a rare incident, both keepers were sent off in each half for handling the ball outside the box.

First, hosts' veteran India custodian Subrata Paul came out of his 18-yard box to inexplicably catch the ball and after the change of ends, Naveen Kumar did something similar to force the referee to take out the red card from his pocket.

Jamshedpur had no option but to chase the match and that left big gaps at the back. Lanzarote's aerial through ball found Corominas on the run, and he slammed it past the goalkeeper after excellent technique to control the ball. With a two-goal cushion, the visitors started attacking with all their force to finish the match off. Ahmed Jahouh took a rasping effort from distance which struck the woodwork, but Goa soon found the third goal.

This time it was Corominas' pass that was cleverly left by Edu Bedia to run onto Lanzarote. The attacker measured his finish and neatly tucked it into the back of the net.

Things got interesting when Goa lost their goalkeeper Naveen Kumar for exactly the same reason Jamshedpur did - but this comedy of errors came too late for Jamshedpur to make the most of it.

Goa had already scampered away to a healthy lead and stormed into the semi-finals where they will face Chennaiyin FC.

Comments
Topics mentioned in this article
FC Goa Jamshedpur FC Indian Super League Football
Get the latest Cricket news, check out the India cricket schedule, Cricket live score . Like us on Facebook or follow us on Twitter for more sports updates. You can also download the NDTV Cricket app for Android or iOS.