ATK are back on top of the Indian Super League table after a 1-0 win against NorthEast United. 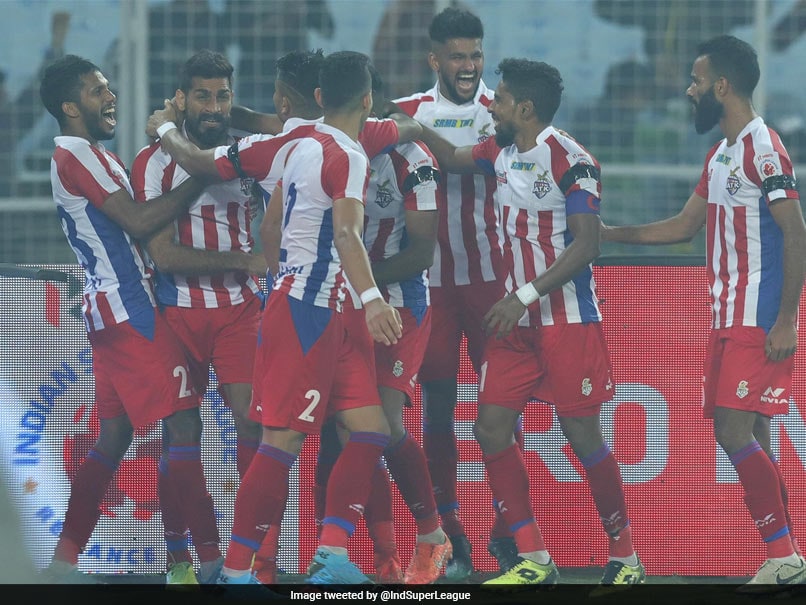 Balwant Singh came off the bench in the 90th minute to score a late winner for ATK.© Twitter

A last-gasp header from substitute Balwant Singh saw ATK pip NorthEast United 1-0 and go atop the Indian Super League table at the Vivekananda Yuba Bharati Krirangan here on Monday. The hosts created plenty of chances but were wasteful until an injury-time strike from substitute Balwant proved to be the difference. Despite his absence from the touchline, Antonio Habas' side returned to the top of the table, level on points with FC Goa who also have 27 points from 14 matches. The Highlanders remained on ninth position with 11 points from as many games.

In-form ATK striker Roy Krishna had the NorthEast defence on red alert early on with his dangerous runs off the ball. After a couple of unsuccessful runs down the right flank, Prabir Das delivered an excellent cross in his third try and it almost found Krishna's run into the box, until Kai Heering made a crucial interception to deny the Fijian a shot on target.

The visitors had their first sight of the ATK goal minutes later. Having received the ball outside the box, midfielder Lalengmawia beat his marker, entered the box but sent his effort just wide.

The tempo of the game slowed down after the early attempts at both ends. ATK looked more likely to open the scoring but couldn't find a way past an organised NorthEast defence.

Both goalkeepers were called into action just before the break. Edu Garcia slid a clever through-ball into the box for Krishna in the 39th minute. The ATK striker's shot from a one-on-one situation was saved by Subhasish Roy Chowdhury with his feet. At the stroke of half-time, a Ninthoinganba Meetei cross met Martin Chaves whose header from inside the box forced a fingertip save from goalkeeper Arindam Bhattacharya.

Robert Jarni hoped to gain a foothold in the game by bringing on Jose Leudo and Federico Gallego as the teams walked out for the second half, but the hosts continued to threaten. The influential Garcia once again sent a brilliant through-ball into the box, this time for Michael Soosairaj who ran in behind the defence and attempted to poke a finish into the net. With the keeper well beaten, Mislav Komorski's goalline clearance kept the scoreline intact.

Defender Pritam Kotal was next in line to be presented with another big chance to score in the 68th minute. A Javier Hernandez free-kick caused chaos inside the box and the ball looped towards Kotal whose strike flew over the bar.

There were chances for both teams to settle the matter towards the end. Nikhil Kadam's through ball almost sent Gallego through on goal but for Arindam's quick intervention. At the other end, Mislav Komorski came up with two crucial interventions to deny Krishna and Prabir Das.

Just when it looked like the teams would have to share the spoils, substitute Balwant Singh produced a match-winner in the last of the four added minutes. The striker, who came off the bench for Edu Garcia in the 90th minute and was left unmarked inside the box for a Hernandez corner-kick, headed the ball into the net to the delight of the home crowd.

NorthEast United FC Football
Get the latest updates on SA vs IND 2021-22, check out the Schedule and Live Score . Like us on Facebook or follow us on Twitter for more sports updates. You can also download the NDTV Cricket app for Android or iOS.