Mahendra Singh Dhoni said India's top-four batsmen have extraordinary record in T20 format so it's difficult to promote Yuvraj Singh up in the batting order. Yuvraj currently bats at No.5. 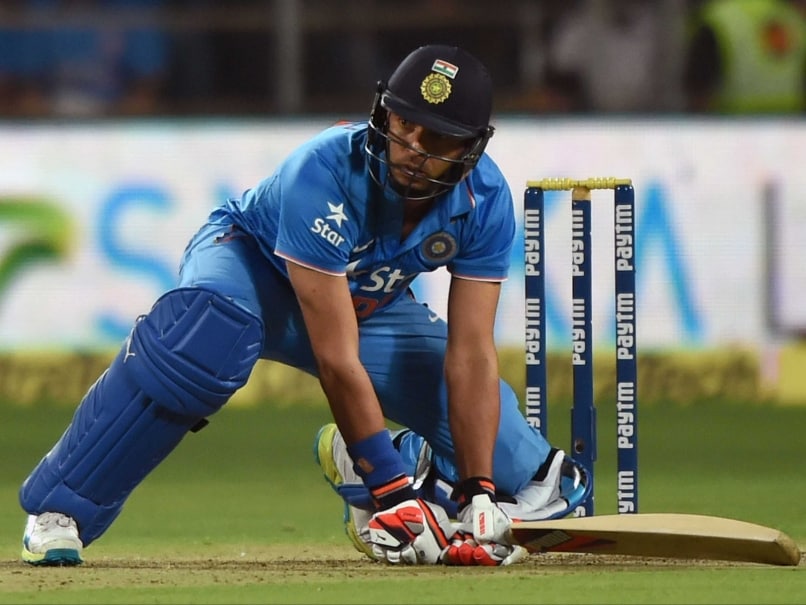 India captain Mahendra Singh Dhoni admitted that he is aware of the lack of batting chances for Yuvraj Singh but said bringing him up the order is "slightly difficult" given the extraordinary record of top-four batsmen.

In a series levelling win against Sri Lanka here Friday night in the second T20 International, Dhoni experimented with the batting line-up, promoting Hardik Pandya ahead of himself and Yuvraj Singh, who came in at No.7 and got out for a duck.

"If you see, Yuvi bats for us at number five. Now it is a bit difficult to promote him above five because in top four, two openers are there and Yuvi can't bat there.

"At No. 3 Virat Kohli is batting and Suresh Raina is there at number four. These four have extraordinary record in T20 in India or outside. So it is slightly difficult," said Dhoni at the post match press conference after India beat Sri Lanka by 69 runs to level three-match series. (Dhoni Insists India Will Continue to Try Different Things Ahead of World T20)

Dhoni, however, said he would like to give the left-hander more batting opportunities.

"Going in the 17th or 18th over and playing straight away will be difficult because he is a proper batsman who can hit. He has always found it slightly difficult. So, we will see how it goes. But definitely, I will try that he too gets exposure and batting opportunity in coming matches.

"But again we want to win games and that will be our priority. But we will see how it goes," said the captain.

Dhoni insisted that all the batsmen will get enough chances in the run-up to the World T20 in March-April.

"Everybody gets a chance to bowl and a lot of time you can experiment with the bowling. But what happens in batting (is) you want to win games and at the same time you want to give individuals fair amount of time in the middle. So, it doesn't always go as planned.

"Definitely in the coming games, we would love to give everybody opportunities so that when T20 starts everyone looks good, getting a fair amount of exposure," he explained.

Pandya scored a quickfire 27 off just 12 balls and Dhoni was all praise for the youngster.

Medium-pacer Jasprit Bumrah also put up a fine show with his figures reading an impressive 3-0-17-2.

"The good thing about Bumrah is he definitely has a bit of pace. He does not have a normal action. So batsmen take time to get used to him and at the same time using yorkers is very good. He is one of the guys so far in whatever games he played has bowled very consistently, especially when he is asked to bowl in the last 3-4 overs at the death -- somebody, who is agreed to do it very well," he said.

"I think most important is that he is playing proper shots. At the same time he is not trying to over hit. The good thing is he is able to get boundary in the first couple of overs then he doesn't need to take a lot of risk.

"But what is important is to see how many runs are good enough. Say, if you have already 10 runs in an over and the ball is not clear, you don't need to manufacture a shot. Everybody has a few shots that they can always play, but doesn't need to manufacture shots. So, I think this is what he (Dhawan) did really well," said Dhoni.

"He was playing proper shots and at the same time he got boundaries. I felt this is something very important in the shorter format. And he has been doing it really well. More often than not as an opener you have to take risk...play your normal, natural game," Dhoni said.

Asked about India's invincible record at his home ground, Dhoni said, "Ultimately you have to play good cricket. And it (JSCA) is a young venue. If you see, not many matches have been played here. But whatever matches were played here India has played very well. So that is a big positive.

"Returning to play in Ranchi gives a separate thrill. And also I can spend a day or two with my family members."

On the absence of his helicopter shot, Dhoni said, "Helicopter shot is played on a particular delivery. If such delivery is not bowled I can't play the shot. It was very difficult to execute such shots given the current opposition strategy."

Dhoni joked when asked about his retirement plans.

Comments
Topics mentioned in this article
India vs Sri Lanka 2015-16 India Cricket Team Sri Lanka Cricket Team Yuvraj Singh MS Dhoni Virat Kohli Cricket
Get the latest updates on T20 World Cup, check out the T20 World Cup Schedule and Live Score . Like us on Facebook or follow us on Twitter for more sports updates. You can also download the NDTV Cricket app for Android or iOS.