India go Down To Sri Lanka in First Twenty20 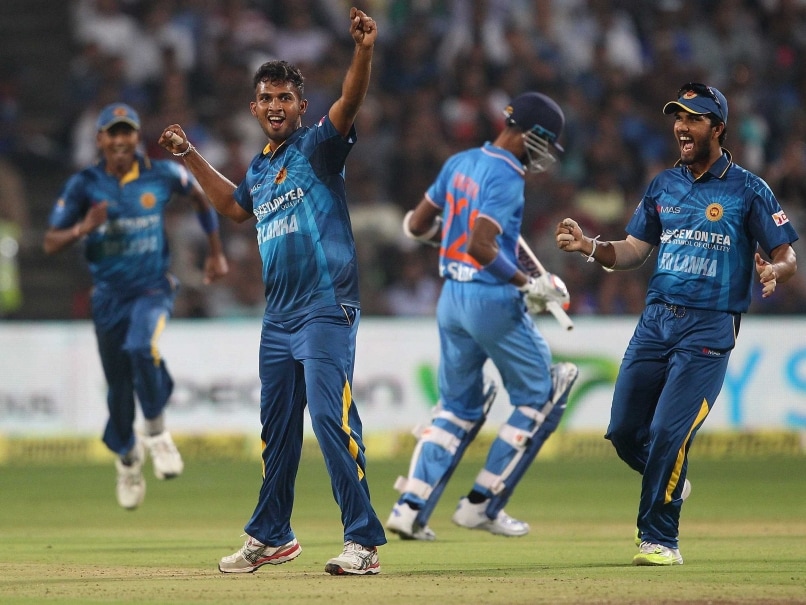 India's winning sequence in T20 internationals came to an embarrassing end tonight after a heavily depleted Sri Lanka pulled off an upset five-wicket victory to take 1-0 lead in the three-match series. (Scorecard | Highlights)

Put into bat on a lively track, which had fair amount of bounce and seam movement, India were skittled out for a paltry 101 in 18.5 overs with rookie pace trio of Kasun Rajitha (3/29), Dashun Shanaka (3/16) and Dushmantha Chameera (2/14) doing bulk of the damage.

It turned out to be a blow for Mahendra Singh Dhoni after the team won 3-0 in the series Down Under to achieve the top rank in ICC table for shortest format.

If Rajitha blew away the top-order, it was Shanaka and Chameera, who decimated the middle and lower-order with only Ravichandran Ashwin with his unbeaten 31 helping home team cross the three-figure.

Such was the abject surrender by the Indian batsmen in the wake of extra bounce and moving deliveries that only Yuvraj Singh (10) and Suresh Raina (20) reached the double figures apart from Ashwin.

When Sri Lanka batted, they lost a few wickets in between but the target was too small to defend as the 39-run stand between skipper Chandimal and Kapugedara turned out to be a clincher. Milinda Siriwardana struck 21 off 14 balls as he finished the match with a flourish hitting Jasprit Bumrah for a six and a boundary.

There was no dearth of effort from the Indian bowlers with Ashish Nehra (2/21 in 3 overs) and Ashwin (2/13 in 3 overs) got a couple of wickets each but it was the failure of the batsmen that hurt India the most.

Comments
Topics mentioned in this article
India Cricket Team Sri Lanka Cricket Team India vs Sri Lanka 2015-16 Cricket
Get the latest updates on T20 World Cup, check out the T20 World Cup Schedule and Live Score . Like us on Facebook or follow us on Twitter for more sports updates. You can also download the NDTV Cricket app for Android or iOS.