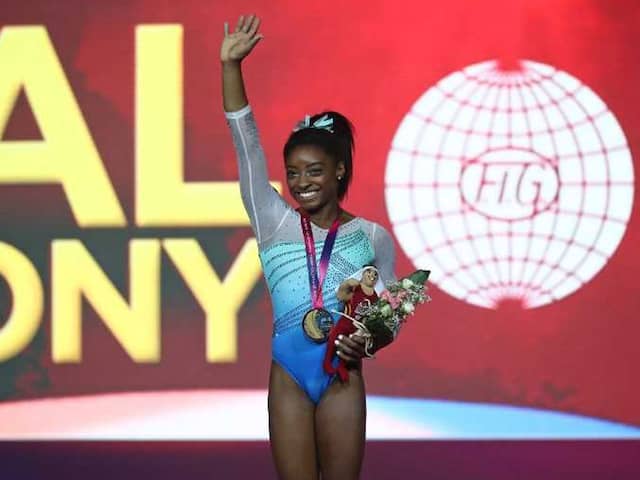 Simone Biles is the 1st American gymnast to win medals on all pieces of apparatus at major competitions.© AFP

Superstar Simone Biles became the first ever gymnast to win 13 world championship gold medals with victory in the individual vault competition in Qatar on Friday. The 21-year-old American broke the all-time record set by Belarusian male gymnast Vitaly Scherbo in 1996, a year before Biles was born. That was Biles' third gold medal of the week in Doha but she was denied a potential clean sweep at these championships by Belgium's Nina Derwael in the uneven bar competition. Biles was beaten into second place on that apparatus, but even in defeat she set a record by claiming her first individual bar medal and becoming the first American gymnast to win medals on all pieces of apparatus at major competitions.

She can equal that record on Saturday in the beam and floor exercise events.

Her day started with expected victory in the vault event.

Favourite to take gold, she received a mark of 15.366, well ahead of second-placed Shallon Olsen from Canada, who finished on 14.516.

Earlier in the week, Biles won gold in the team and all-around events.

However, a potential golden clean sweep was always likely to face its greatest challenge in the uneven bar contest and so it proved.

Setting her own piece of history, Derwael's gold was the first by a Belgian at a world championships.

In the men's competition, the most nail-biting finish came in the pommel horse where China's Xiao Ruoteng took gold despite scoring the same, 15.1665, as second-placed Max Whitlock from Great Britain.

Ruoteng won despite having a less difficult routine, by scoring higher with judges on the execution marks.

There was also a thriller in the rings event, and possibly the bravest performance of the day by Greece's Eleftherios Petrounias.

Due to go into hospital next week for surgery on his left shoulder, the defending champion narrowly edged out long-time rival, Brazil's Arthur Zanetti by 0.266, to set off delirious scenes inside Doha's Aspire Dome.

Comments
Topics mentioned in this article
Gymnastics Other Sports
Get the latest Cricket news, check out the India cricket schedule, Cricket live score . Like us on Facebook or follow us on Twitter for more sports updates. You can also download the NDTV Cricket app for Android or iOS.