Listen to the latest songs, only on JioSaavn.com
Gymnastics
Sports Home
Story ProgressBack to home

Dipa Karmakar's rehabilitation after a knee injury is taking longer than expected and that forced her out of the Asian Championships. 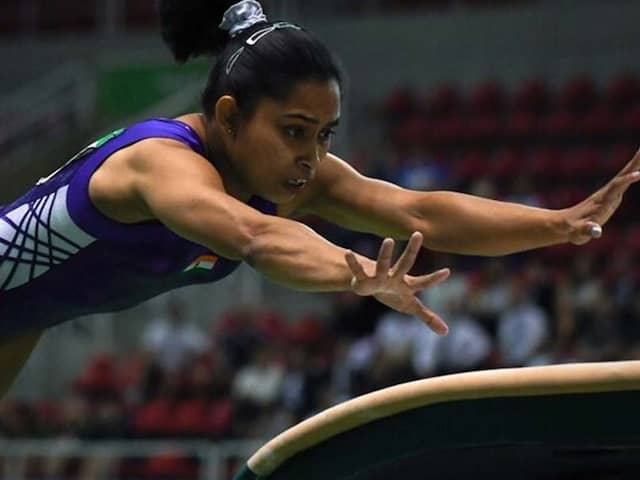 Dipa Karmakar failed to take part in the World Cup in Doha due to injury.© AFP

India's star gymnast Dipa Karmakar, who missed the Asian Championships in Mongolia last month due to a knee injury, is still rehabilitating and fighting to be fit for 2020 Tokyo Olympics, Dipa Karmakar's coach Bisweswar Nandi said. Nandi added that he had no idea when Dipa will return as she is still recovering. He admitted that her rehabilitation was still on and risking her till she was completely fine would not be a good idea. The World Championships in Germany will serve as the qualifying event for the Tokyo Olympics.

"Dipa's rehabilitation is still going on and it will go on for some time now," Nandi told IANS on Monday.

The injury is taking longer than expected to heal and that forced Dipa out of the Asian Championships, where Pranati Nayak clinched a bronze medal in vault event.

"We cannot do anything right now. We will act according to doctor's advice. I won't risk her unless she is completely fine. Once she is fine, I will consult the doctor and the physio," Nandi said.

The Tripura girl, who finished outside medals at the 2016 Rio Olympics, will now face an uphill task to be ready in time for the World Championships, starting on October 4.

Asked about a timeline as to when she can return to action with the Olympics less than one year to go, Nandi sounded non-committal.

"I can't say anything about her Olympics participation at the moment. It won't be fair for me to comment. I need to talk to the doctor first.

"I cannot tell you when she will return, I cannot give a tentative timeline. Like I said, her rehabilitation is still going on and it will go on."

"But one thing I can tell you, we haven't lost hope yet. Now it all depends on the condition of her feet, doctor and physio. Even if there is one percent pain, we won't risk her."

For gymnasts to seal an Olympics berth, the qualification system comprises eight World Cups. The top three in these events make the cut.

Dipa aggravated her knee injury while participating in the Baku World Cup in March. She has been recovering since then and could not take part in the World Cup in Doha, losing crucial ranking points in the process.