Dipa Karmakar, the 22-year-old who hails from the north-eastern state of Tripura, qualified in the artistic gymnastics event for the Rio Olympics. 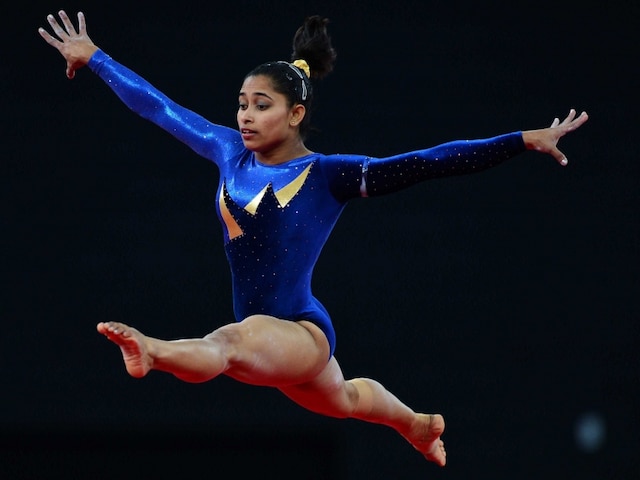 Dipa Karmakar has become the first Indian gymnast to qualify for the Olympics.© AFP

Cheer and joy gripped Tripura since early Monday after local girl Dipa Karmakar, scripting history, became the first Indian woman gymnast to qualify for the Olympics after putting up a strong show at the final qualifying and test event for the Rio Games. (Dipa Karmakar Declares Her Next Objective is to Win 2016 Rio Olympics Medal)

"We came to know the splendid news through television. Since Sunday our entire family was sitting in front of the TV set. One and all roared suddenly when Dipa's name was announced that she had qualified for the Olympics," Dipa's father Dulal Karmakar told IANS. (Dipa Karmakar Becomes First Indian Woman to Qualify For 2016 Rio Olympics Gymnastics)

"Our long cherished dream is fulfilled, as our daughter has been rewarded in the highest international sports meet. Dipa was a little nervous when she was talked to us on Saturday over phone from Rio de Janeiro," Dipa's mother Gauri Karmakar said as tears of joy rolled down her cheeks. (Dipa Karmakar Wins Gold in Vaults, After Historic 2016 Rio Olympic Qualification)

The 22-year-old, who is an Asian Championship bronze medallist, qualified in the artistic gymnastics event for the Rio Olympics after collecting 52.698 points in the test event.

As soon as the good news spread through television sets, people -- sports lovers in particular -- converged on Dipa's home at Abhoynagar, on the outskirts of the capital city of Agartala, with bouquets and sweets.

Congratulating Dipa and her coach Bisweswar Nandi, Tripura Sports Minister Sahid Choudhury told IANS: "We are hopeful that Dipa would also get medals at the Rio Olympics. We are ready to extend necessary support to her. Dipa's feat would surely encourage Indian gymnasts in general and Tripura sports persons in particular. She has brightened the Indian face in international sports arena."

Dulal Karmakar, an SAI (Sports Authority of India) coach in weightlifting, said: "She needs more technical and financial support to earn more skills in gymnastics to get new rewards and accolades."

"We are very happy with our daughter's performance. Her recognition was also because of her coach Bisweswar Nandi, who has worked very hard for her, and Dipa had done a lot according to his coaching," Karmakar added.

"Tripura has young men and women who have enormous skills in gymnastics and they would be able to show their performance if they got appropriate support and encouragement," another Tripura gymnast -- and Arjuna awardee -- Mantu Debnath said.

Dipa, who is national champion for the past five years, is a physical instructor under Tripura's sports and youth affairs department. She was the first Indian woman who clinched a bronze medal in artistic gymnastics in the 20th Commonwealth Games in Glasgow.

Dipa is only the second Indian gymnast to have won a Commonwealth Games medal (2014). She finished fourth in the Asian Games in the same year and then won bronze at the Artistic Gymnastics Asian Championships in Japan in 2015.

A five-time national overall individual champion between 2010-2014, Karmakar was given the Arjuna Award last year. India's newest sports sensation started her career in gymnastics when she was barely six years old.

The Election Commission has appointed this ace gymnast as Tripura state's election icon to popularise election-related matters and encourage participation of more people in the poll process.