US Open: Lead for Michael Thompson, the buzz for Tiger Woods

he lead at the US Open belonged to Michael Thompson. The buzz came from Tiger Woods. 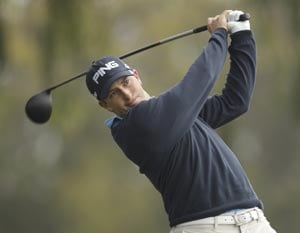 The lead at the US Open belonged to Michael Thompson. The buzz came from Tiger Woods.

The struggles came from the top three players in the world rankings.

Even as Thompson strung together four birdies on the back nine at Olympic Club that carried him to a 4-under 66, Woods was on the other side of the course showing how to handle the toughest test in golf.

He was never out of position. None of his tee shots found the deep, nasty rough lining the fairways. There was little stress for such a demanding major.

With consecutive birdies late in his round, including a 35-foot putt that banged into the back of the cup on No. 5, Woods opened with a 1-under 69 to raise hopes that he can finally end that four-year drought in the majors.

"I felt like I had control of my game all day," Woods said. "Just stuck to my game plan - and executed my game plan."

He was vague on the details of that plan, although it surely wasn't the one followed by the other two guys in his star-powered group. Phil Mickelson hit a wild hook for his opening tee shot that was never found, presumably lost in a cypress tree, and he matched his worst opening round in a US Open at 76. Bubba Watson chopped his way through the rough to a 78, showing that "Bubba Golf" works better at Augusta National than at Olympic Club.

They weren't the only ones to struggle.

Luke Donald, the No. 1 player in the world, is trying to win his first major. It most likely won't be this one. He failed to make a single birdie and shot 79. He played with Rory McIlroy, the defending champion and No. 2 in the world, who shot a 77. Lee Westwood, No. 3 in the world, was 4 over through six holes and rallied for a 73.

The top three in the world ranking combined for three birdies.

"It shows how tough it is," Donald said. "There aren't that many opportunities out there."

Olympic Club, in firm conditions and with fairways that are among the toughest to hit, is a far different test from Congressional, where the McIlroy shattered the US Open scoring record at 16-under 268. His record is safe here.

"Anything just a little off and it really punishes you," McIlroy said. "You have to be precise with your tee shots and your iron shots and leave it on the right side of the pins, and today I didn't really do any of that."

Nick Watney holed out from the fairway for an albatross 2 on the par-5 17th hole, sending him to a 69. Graeme McDowell, who won the US Open two years ago down the coast at Pebble Beach, and Justin Rose also had 69 in the faster conditions of the afternoon. David Toms shot his 69 in the morning, relying on a solid short game and a good attitude.

"You really just have to concentrate, give it your all on every shot and never give in to the golf course, because it will punish you if your attitude is not good, if your concentration is not good," Toms said. "There's just too many hard shots out there to really ever give in to it and not be there."

Thompson's game seems to work on this quirky, tree-lined course built on the side of a giant dune that separates the Pacific Ocean from Lake Merced.

He was runner-up in the 2007 US Amateur at Olympic Club and couldn't wait to get back.

After a roller coaster of a front nine that featured consecutive bogeys and holing a bunker shot for birdie on the downhill par-3 third hole, Thompson hit his stride on the back nine, even if hardly anyone was watching.

He made five consecutive 3s - three of them birdies - and closed his dream round with a 10-foot birdie putt on the short, tough 18th for the lead. Thompson took only 22 putts.

"On the back side, the putter ... seems like every putt went in the hole," said Thompson, a 27-year-old playing his first US Open as a pro. "Got a little nervous there once all those cameras showed up. It's always a little bit of an adjustment. In that sense, I kind of wish I was Phil or Tiger, because you get the cameras from the beginning."

There weren't enough cameras or fans to find Mickelson's opening tee shot, but it was easy to find Woods.

He missed only four fairways - three of them that ran off the severe slopes and into the first cut, the other into a bunker on the 256-yard seventh hole, which is where he was aiming. The only glitch was failing to get the ball closer to the hole with short irons, including the 14th when it landed on the back of the green and bounced off the base of the grandstand.

That led to one of his two bogeys, the other at No. 6 with a poor bunker shot. The only surprise was a good one - the 35-foot birdie putt on the fifth that he struck too hard and worried it might lead to a three-putt until the hole got in the way.

"Five was a fluke," Woods said. "That putt was off the green."

A marine layer in the morning allowed for cool, overcast conditions that eventually gave way to sunshine. That didn't help. Steve Marino opened with an 84. Zach Johnson didn't feel as though he played all that badly until he signed for a 77. Padraig Harrington thought the course was fair, and allowed for good scores. But he had two four-putts and a three-putt that ruined a reasonable day and gave him a 74.

Mickelson was looking forward to playing with Woods. The last time they were together, Mickelson closed with a 64 and buried him at Pebble Beach in February - but he could not have envisioned a worse start. The hook was bad enough. But as Mickelson approached the gallery and looked for a crowd surrounding his ball, his eyes widened when a marshal told him, "No one heard it come down."

Five minutes later, he was on his way back to the tee.

Mickelson made an unlikely bogey on the hole, added two more bogeys and was fighting the rest of the day. A three-putt late in the round cost him dearly, and now Mickelson can only hope he's around for the weekend.

"I can't really think about the lead or anything," said Mickelson, who was 10 shots behind. "I've just got to make the cut right now, and to do that I've got to shoot something under par."

Woods is coming off his second win of the year at Memorial, and while that made him the favorite at the US Open, recent history left some questions.

He won Bay Hill by five shots going into the Masters, and then had his worst performance as a pro at Augusta National. Woods said he wasn't hitting the ball as consistently well in the spring, not like he is now. And it showed.

It wasn't enough for the lead, but it was enough to break par, which is never bad at Olympic Club.

Thompson understands all the fuss over a 14-time major champion who is showing signs of returning to the top of his game. He was more than happy with his name atop the leaderboard, and he made it clear he wasn't going to settle for one good round.

"A lot of people don't know who I am, and I'm totally OK with that because I've always been a player that just kind of hangs around," Thompson said. "I don't give up very easily and I'm very proud of that. Give Tiger the spotlight. I don't care. I'm going to go out and play my game. If I go out and putt the way I did today, I'll be contention."

Comments
Topics mentioned in this article
Michael Thompson Tiger Woods Golf
Get the latest updates on ICC Women's Cricket World Cup 2022 and IPL 2022, check out the Schedule , Live Score and IPL Points Table. Like us on Facebook or follow us on Twitter for more sports updates. You can also download the NDTV Cricket app for Android or iOS.