Former British Open champion Ben Curtis won his first US PGA Tour title since 2006 on Sunday, holding on for an emotional two-shot victory over Matt Every and John Huh. 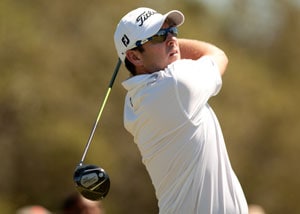 Former British Open champion Ben Curtis won his first US PGA Tour title since 2006 on Sunday, holding on for an emotional two-shot victory over Matt Every and John Huh.

"It's been a tough couple of years," a teary Curtis said as he struggled for composure. "Just played through it, that's all you can do."

Curtis's lackluster results had seen him lose his full playing privileges on the US tour.

That's the year Curtis shot to prominence with his victory at the British Open, emerging with the triumph after a late collapse by Thomas Bjorn.

Every carded a 71 for 281, but some missed chances on the greens cost him a chance at a first tour title. Huh, winner of the Mayakoba Classic already this season, seized a share of second with a 69.

Huh almost pulled out on Thursday, when he was nine over through his first eight holes of the tournament.

He bounced back with rounds of 68 and 67 to put himself in the mix on Sunday, but nevertheless said he would see a doctor about a sore wrist.

"I didn't really expect too much, final round," Huh said.

Every, meanwhile, had opened the tournament with a course-record 63 at the TPC San Antonio on Thursday.

On Sunday, however, four missed putts from within 10 feet helped prevent him from catching Curtis.

Curtis led by one stroke when he fired a wedge over the 17th green. He chipped to 23 feet than made the left-to-right uphill putt to save par.

After that, his 12-foot birdie at the last was icing on the cake.

"You think you're just staying positive and not worried about it, but I think deep down, you realize all the hard work you put in that, you know, finally paid off," Curtis said.

"When you come out here and win one, well, if I win one every year I have a great career. That would be true," Curtis said. "But, you know, to get to three, four, five wins - you're a solid player. I just feel like you get yourself into contention and just have that belief, and anything can happen."

Defending champion Brendan Steele carded a 67 without a bogey to head a group tied for fourth on five-under 283. He was joined by South Korea's Charlie Wi (71), Bob Estes (69) and Brian Gay (70).

Comments
Topics mentioned in this article
Golf Matt Every Ben Curtis John Huh
Get the latest Cricket news, check out the India cricket schedule, Cricket live score . Like us on Facebook or follow us on Twitter for more sports updates. You can also download the NDTV Cricket app for Android or iOS.