Defending champions the United States took command of The Presidents Cup on Saturday, dominating the third-day foursomes to open a five-point lead over the International team at Royal Melbourne. 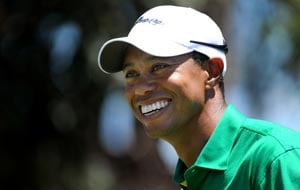 Defending champions the United States took command of The Presidents Cup on Saturday, dominating the third-day foursomes to open a five-point lead over the International team at Royal Melbourne.

Resuming with a two-point advantage, the Americans won four of the five foursomes to take charge ahead of Saturday's remaining five four-ball matches.

The Americans were 7.5 points away from claiming their seventh Presidents Cup and left Greg Norman's Internationals with it all to do to capture only their second teams event after winning in 1998 at Royal Melbourne.

Playing conditions were in stark contrast to Friday's hot blustery weather with frequent rain and cooler conditions on Saturday.

Woods, who was pointless after losses with Steve Stricker in Thursday's foursomes and Dustin Johnson in Friday's four-ball, broke through with a three and two victory with Johnson over the Australian-South Korean pair of Adam Scott and K.J. Choi.

"I felt like Dustin and I were hitting the ball well, just keeping a lot of heat on them and eventually one should fall," Woods said. "Unfortunately, it was not till the last hole."

The Cup rookie combination of Watson and Simpson cruised past the Australian duo of Robert Allenby and Geoff Ogilvy three and two for their third point of the event.

Mickelson and Furyk came from two holes down at the 10th to trump Australians Aaron Baddeley and Jason Day two and one.

Three-time Masters champion Mickelson, who has been ever-present at The Presidents Cup since its 1994 inauguration, has now won 18 career matches, one less than Woods.

"We fought hard and stayed in the match and we ended up having a nice run on the back nine."

Sunday's final day will be decided by 12 singles matches.

Comments
Topics mentioned in this article
Golf Phil Mickelson Jim Furyk Steve Stricker Tiger Woods
Get the latest Cricket news, check out the India cricket schedule, Cricket live score . Like us on Facebook or follow us on Twitter for more sports updates. You can also download the NDTV Cricket app for Android or iOS.