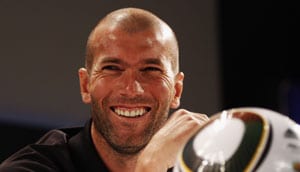 Benzema "has changed, it's true. Why? I don't know, I can't say," Mourinho told a news conference.

"The main person responsible is Karim himself. There is also the positive influence of other players, of myself because I put a lot of pressure on players to play to the maximum ability," he said.

"I also think of Zizou (Zidane). He has several times worked psychologically with the guy (Benzema)."

Zidane, a former Real star, has worked as an advisor to the club's president, Florentino Perez, since last November.

At Mourinho's request, Zidane has also recently been involved with the first team.

France international Benzema, 23, who left Lyon for the Spanish capital two years ago, has been out of favour with Mourinho. But he has recently returned to form, scoring two goals in each of his last three league matches.

Nine-time European champions Real have crashed out of the Champions League in the last 16 for six successive seasons.

Lyon eliminated Real 2-1 on aggregate at this stage last season so Madrid will be out for revenge and have the upper hand after a 1-1 first leg draw in France.

"This is the first time Lyon play at the Bernabeu without an aggregate advantage," Mourinho said.

"They've never lagged behind against us, so the game will be different this time around. We qualify with the current aggregate, which forces them to play in a different fashion. We will be defensive and wait for them to play their game."

"We will play to finish at least 0-0 because it's enough to reach the next round," Mourinho said. "We expect (goalkeeper Iker) Casillas to make a lot of saves."

Comments
Topics mentioned in this article
Football John Terry Real Madrid France Karim Benzema
Get the latest updates on ICC T20 Worldcup 2022 and CWG 2022 check out the Schedule, Live Score and Medals Tally. Like us on Facebook or follow us on Twitter for more sports updates. You can also download the NDTV Cricket app for Android or iOS.