Young and mature shine for England

A 30-year-old England outsider earning just his fifth cap worked in tandem with a teenager making his full international debut to show Fabio Capello how the national team can be reinvigorated. 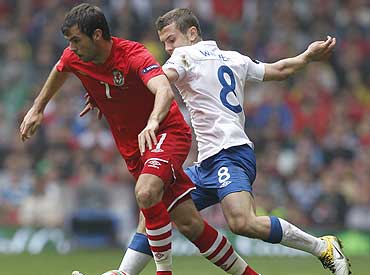 A 30-year-old England outsider earning just his fifth cap worked in tandem with a teenager making his full international debut to show Fabio Capello how the national team can be reinvigorated.

England completely overwhelmed Wales - despite only winning 2-0 in European Championship qualifying on Saturday - after 19-year-old midfielder Jack Wilshere was given the license to roam forward, leaving Scott Parker to provide the defensive shield.

"Scotty did the stuff he's been doing brilliantly for West Ham all season, sitting in front of the back four," fellow midfielder Frank Lampard said. "Jack's shown what he can do with Arsenal and England now. It was nice to play with an extra body in there, to get a bit more possession with a bit of insurance behind you."

Capello is ready to build his team around Wilshere, who had played less than an hour across two friendlies for England before Saturday but has impressed the Italian coach by establishing himself as a creative force for Arsenal this season.

"It was a normal performance from Wilshere," Capello said after the win in Cardiff. "His performances this season have been incredible. He has improved an amazing amount in a short space of time. (Arsenal manager) Arsene Wenger said the same thing. He played like someone of 29 with 40 caps. I hope there is more to come. Good players are always improving."

Wilshere felt even more comfortable with Capello ditching the rigid 4-4-2 formation that was criticized during the dismal 2010 World Cup campaign in favor of a more fluid 4-3-3.

"The midfield shape worked well," Wilshere said. "We play it at Arsenal and it works better with one holding and two going forward. Scotty was great and so was Frank in there. It made it easy for me to play. You have to thank Scotty for that performance today and Frank is always great for England."

Parker, who plays for Premier League struggler West Ham, hadn't started for England since Oct. 2006 before being chosen to anchor the midfield in the Millennium Stadium.

"He won back a lot of possession for us," Capello said. "He was always in a good position just in front of the back four all the time."

With Parker and Wilshere linking up so well in a midfield triumvirate featuring Lampard, the 32-year-old Chelsea player may be competing with fellow veteran Steven Gerrard, who is injured, for a starting spot in future.

"It's the manager's prerogative to use different systems at different times," Lampard said. "I think he did it today cleverly and that gave us the dominance in midfield."

Wales capitulated inside 15 minutes, conceding a penalty kick that Lampard converted and allowing the defense to be torn apart for Darren Bent to tap in the net.

"We got the opening two goals and that was the idea, to press them high, get early goals," Wilshere said. "We made it comfortable for ourselves. They had some chances but we felt in control of the game."

Ashley Young, who featured alongside Wayne Rooney and Bent up front, played a part in both goals. The 25-year-old winger's pace led to him earning the penalty kick when he was caught by Aston Villa teammate James Collins and he squared to Bent for the second goal.

"It was a new formation for us but people knew what they were doing and it worked," Young said. "We worked on getting the ball back as soon as we lost it and putting them under pressure straight away."

The victory - England's third from four qualifiers - enabled Capello's side to reclaim top spot from Montenegro in Group G on the road to Euro 2012.

Comments
Topics mentioned in this article
Football Alou Diarra West Indies Cricket Team Australia Cricket Team England Cricket Team Lech Poznan
Get the latest updates on ICC T20 Worldcup 2022 and CWG 2022 check out the Schedule, Live Score and Medals Tally. Like us on Facebook or follow us on Twitter for more sports updates. You can also download the NDTV Cricket app for Android or iOS.