Lionel Messi hasn't played for Barcelona since sustaining knee ligament damage in a 2-1 victory over Las Palmas in September. 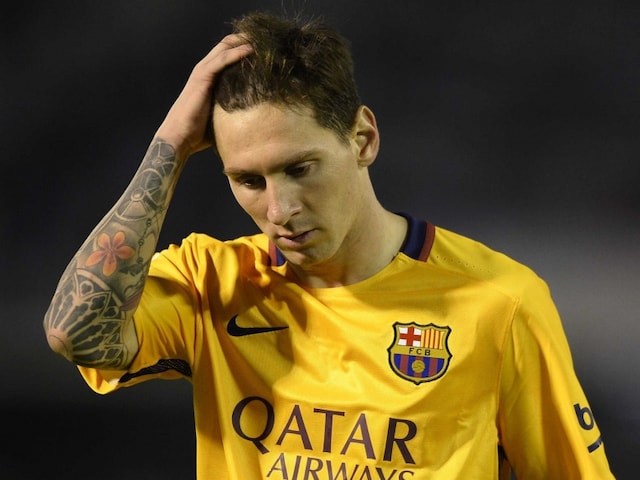 There is an outside chance that Lionel Messi could make a dramatic return against Barcelona's biggest rivals Real Madrid in the El Clasico.© AFP
Doha:

Barcelona legend Xavi Hernandez says his old team has not missed the world's best player Lionel Messi, ahead of this weekend's first clash of the season with Real Madrid. (Lionel Messi's Recovery is On Track: Luis Enrique)

The midfielder, now playing in Qatar, said that Barcelona have played extremely well without their talisman and four-time Ballon d'Or winner.

Messi hasn't played for Barca since sustaining knee ligament damage in a 2-1 victory over Las Palmas in September.

However, there is an outside chance he could make a dramatic return against Barca's biggest rivals Madrid in the "El Clasico" in the Spanish capital on Saturday.

But with or without him, Xavi says Barcelona are capable of beating the best.

"Messi is a great player without a doubt and I believe he plays a crucial role in Barcelona in every game," Xavi, who now plays for one of Qatar's top teams, Al Sadd, told AFP.

"But I must say as well that the team is playing well now without him... and scoring plenty of goals in the process which means that Barcelona manage to do well without him.

"They didn't suffer from his absence which is a good sign."

Strikers Neymar and Luis Suarez have scored 10 goals apiece since the Argentine was sidelined.

The duo could once again lead the line at the weekend with Spanish media suggesting that Barca may not rush Messi back into the starting line-up as a precaution.

Messi returned to training on Monday.

This weekend's match is the first El Clasico in which Xavi will not play a role in the past 17 years.

He said the result is always difficult to predict, but added that Barcelona are "capable of repeating the treble this season".

Last year, the Catalans won the Champions League, La Liga and the Copa del Rey, one of the most successful seasons in the club's 116-year history.

Xavi added that he was enjoying his time in the Gulf but ruled out becoming Qatar's national coach in the future.

Xavi played more than 500 times for Barcelona in a career stretching 17 years.

The former World Soccer Player of the Year won eight La Liga and four Champions League titles while at Barca.

Comments
Topics mentioned in this article
Xavi Football
Get the latest updates on IPL 2020, check out the IPL Schedule for 2020 and Indian Premier League (IPL) Cricket live score . Like us on Facebook or follow us on Twitter for more sports updates. You can also download the NDTV Cricket app for Android or iOS.