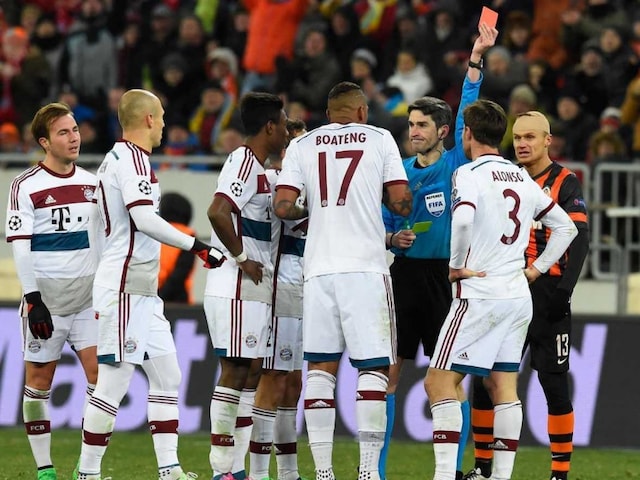 Alonso got a red card as Bayern held on to a goalless draw© AFP
Lviv, Ukraine:

Bayern Munich's Xabi Alonso was sent off on his 100th Champions League appearance as the German side were held to a scoreless draw by Shakthar Donetsk in the last 16 first leg clash on Tuesday.

Alonso picked up his second booking after 65 minutes but Bayern comfortably held on to secure a positive result in a first leg played out in sub-zero temperatures in Lviv.

The Bundesliga champions will be confident they can complete the job in three weeks' time in Munich but Pep Guardiola will be relieved that they survived an ill-tempered encounter in Ukraine.

Guardiola preferred to keep his own counsel regarding Alonso's sending off.

"I obviously followed it from the sidelines and the referee decided what he decided," said Guardiola.

"I don't want to say anything more about it."

The former Germany sweeper also agreed with the Spaniard's suggestion that a scoreless draw away from home is not necessarily positive.

"On the face of it, it sounds good but I'd of the opinion that it's a dangerous result."

Shakhtar Donetsk -- who had not played a competitive match since the last group game on December 10 -- had been forced to host this game over 1,000 kilometres from the club's Donbass Arena due to ongoing violence in the east of the country.

But they successfully stifled the German visitors, who had come into the match brimming with confidence following an 8-0 win over Hamburg at the weekend.

Shakhtar's Romanian coach Mircea Lucescu was delighted despite their rustiness they had not taken a similar hammering.

"The first plan was not to lose," said Lucescu.

"The second was to keep our chances alive for the second leg. We did that.

"What I regret is that we didn't try to play our game when Bayern were down to 10 men."

Bayern almost got an away goal after only two minutes, when Arjen Robben clipped a ball into Bastian Schweinsteiger who hooked wide from inside the penalty area.

Shakhtar could be forgiven for a slow start since they had played their last competitive game 10 weeks ago in their final group game in the competition.

And after 11 minutes, Robben created another good opportunity when his reverse pass picked out the run of Thomas Mueller inside the penalty area.

From a tight angle, Mueller prodded the ball past keeper Andriy Pyatov but did not find the net.

The home team dug in after that and rarely looked threatened despite allowing Bayern 70 per cent possession in the opening half hour.

After 24 minutes, Alonso picked up his first booking and Bayern keeper Manuel Neuer almost fumbled the free-kick that followed into Douglas Costa's path.

Just past the half hour Bayern created another opening.

Shakhtar coughed up possession cheaply in front of their own penalty area, allowing Franck Ribery and Mueller to combine to good effect.

Mueller slid in to connect with Ribery's neat cut back but the German international could not steer his strike from the penalty spot on target.

Shakhtar contained the German league leaders until half-time and a scrappy second half only came to life when Ribery and Costa were involved in an altercation after a foul by Darijo Srna.

Just a couple of minutes later Costa was lucky to escape with only a yellow card after his elbow caught the Bayern midfielder flush in the face.

The complete commitment of both sides was illustrated just past the hour when Alonso and Shakhtar's Luiz Adriano both called for treatment when they collided near the centre circle.

But Alonso's luck ran out when he was shown a second yellow card for hauling down Alex Teixeira.

Six other players were booked in a hard-fought game, with Ribery coming in for particularly rough treatment, but Shakhtar never looked like taking advantage of the extra man.

Comments
Topics mentioned in this article
Bayern Munchen Shakhtar Donetsk Football
Get the latest Cricket news, check out the India cricket schedule, Cricket live score . Like us on Facebook or follow us on Twitter for more sports updates. You can also download the NDTV Cricket app for Android or iOS.