World Cup qualifiers: Germany in Sweden to hunt for revenge

The final qualifier is meaningless for both sides with Germany already confirmed as Group C winners while second-placed Sweden face a two-legged play-off in November in order to claim their Brazil berth. 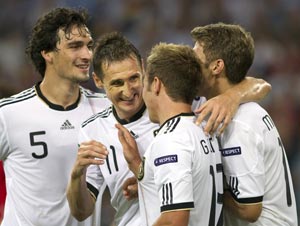 With only pride at stake for Sweden and Germany in Tuesday's World Cup qualifier, the Germans come to Stockholm to settle a score following last year's dramatic draw in Berlin.

The final qualifier is meaningless for both sides with Germany already confirmed as Group C winners while second-placed Sweden face a two-legged play-off in November in order to claim their Brazil berth.

Erik Hamren's Sweden are chasing a confidence-boosting win while the Germans have a score to settle, after throwing away a four-goal lead as last October's World Cup qualifier in Berlin ended 4-4.

Swedish superstar striker Zlatan Ibrahimovic, who is suspended this time, sparked a stunning second-half fight-back from 4-0 down in the German capital before the Swedes' scored a 93rd-minute equaliser.

The draw proved to be the only points dropped so far in Germany's qualifying games for Brazil and Joachim Loew's team are chasing their ninth win from 10 matches on Tuesday.

"We're happy to qualify but we definitely have a score to settle against Sweden," said Loew, whose side lead the series with 14 wins from 35 games compared to the Swedes' 12 victories, with nine draws.

"I might switch things up but we want to win in Sweden."

"There is still a score to settle, we want to win the game, even if the ticket for Brazil has already been decided," said the 22-year-old.

Having last lost either a World Cup or a European Championships qualifier in October 2007, Germany are looking to extend their unbeaten run to 32 qualification matches.

If Sweden are to end that run, they will have to do so without Ibrahimovic after the 32-year-old picked up a yellow card in Friday's win over Austria in Solna.

The Paris St Germain star produced the crucial winner with the match edging towards a 1-1 draw when he brilliantly brought down a long ball and slotted home a left-footed shot in 86th minute.

Germany will be without Sami Khedira after the Real Madrid defensive midfielder also picked up one yellow card too many against the Irish.

Loew will again be without first-choice strikers Miroslav Klose and Mario Gomez having used Arsenal midfielder Mesut Ozil as a lone forward in Friday's win.

Untested striker Max Kruse is likely to start up front, while Toni Kroos is expected to drop into the holding midfield role alongside Bayern Munich team-mate Bastian Schweinsteiger, who wins his 100th cap.

Dortmund's Mats Hummels is set for a recall at centre-back having sat out the last three internationals after losing his place due to poor form.

Teenager Julian Draxler could also come in on the left wing for Schuerrle after a series of eye-catching displays for Schalke while Hamburg's Rene Adler is set to take over in goal from Manuel Neuer.

Comments
Topics mentioned in this article
Football Sweden Germany Tennis
Get the latest updates on ICC T20 Worldcup 2022 and CWG 2022 check out the Schedule, Live Score and Medals Tally. Like us on Facebook or follow us on Twitter for more sports updates. You can also download the NDTV Cricket app for Android or iOS.